Do You Speak Football?

A Glossary of Football Words and Phrases from Around the World 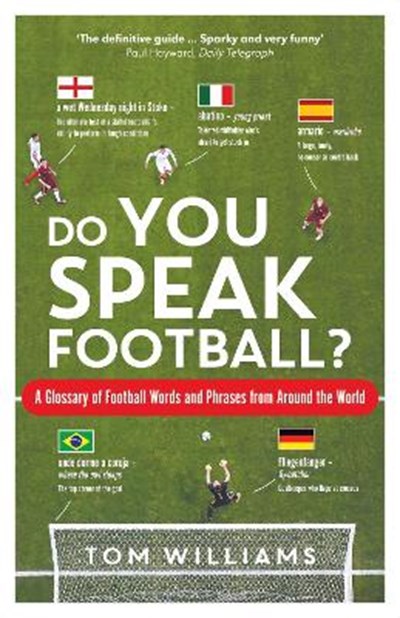 Do You Speak Football?

A Glossary of Football Words and Phrases from Around the World

QTY
Add to Basket
Publisher: Bloomsbury Publishing PLC
ISBN: 9781472947215
Number of Pages: 272
Published: 03/05/2018
Width: 12.9 cm
Height: 19.8 cm
Description Author Information Reviews
'At last, the definitive guide to football phraseology across the world... Sparky and very funny.' Paul Hayward, Daily Telegraph ''Amusing and informative in equal measure.' Oliver Kay, The Times An expertly compiled and utterly fascinating compendium of the weird and wonderful words and phrases used to describe football around the world. To speak football is to speak a language of a thousand tongues... In this ground-breaking global glossary of football words and phrases, you'll discover the rich, quirky and joyously creative language used by fans, commentators and players across the world. From placing a shot 'where the owl sleeps' in Brazil, to what it means to use your 'chocolate leg' in the Netherlands, via Wembley-Tor - a phrase adopted by Germans to describe a dubious goal - this comprehensively researched book will entertain and inform in equal measure. Discover the unfortunate Finnish term for a holding midfielder, what it means when South Korean fans get nostalgic about a 'Leeds season' and why Dundee United supporters should keep their heads down in Nigeria. With over 700 terms from 89 countries (including 29 ways to describe a nutmeg), this is the definitive guide to the global language of football.

Tom Williams lives in London and covers football for the Agence France-Presse international news agency. His writing has also been published by The Blizzard, The Guardian and Bleacher Report. He has featured on BBC Radio 5 Live, BT Sport, CNN, BBC News 24, the BBC World Service, talkSPORT and the Totally Football Show. @tomwfootball #doyouspeakfootball