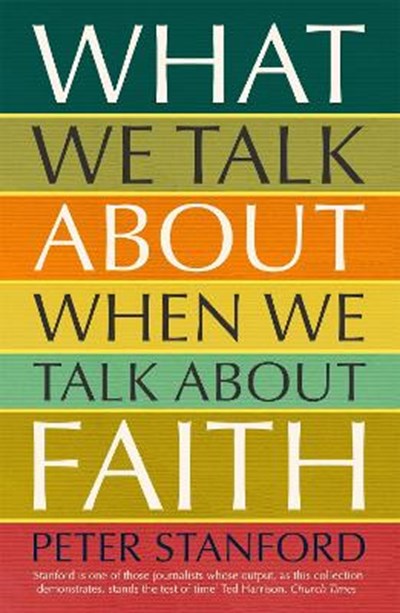 QTY
Add to Basket
Publisher: Hodder & Stoughton
ISBN: 9781473678293
Number of Pages: 256
Published: 07/02/2019
Width: 12.9 cm
Height: 19.2 cm
Description Author Information Reviews
Interviews with people of faith including: Sara Maitland | Sister Wendy Beckett | Delia Smith | The Revd Richard Coles | Dermot O'Leary | Cherie Blair | Archbishop Desmond Tutu | Bronwen Astor | Amos Oz | Nick Cave Peter Stanford has been interviewing people of faith during his thirty-five years as a journalist at national papers including the Daily Telegraph, the Independent and The Guardian, as well as for the church press. What fascinates him in such conversations is how creating a space to talk unguardedly about faith unlocks so much more: what shaped and continues to shape the public and private lives of high-profile names; how those values connect with the work they are best known for; and why they believe the search for faith makes them who they are. This collection of the best of his interviews - some with household names, others with those not so immediately familiar, but all people of achievement with a resonant story to tell - aims to lift the lid on a topic that has become increasingly marginalised in the public square of our increasingly secular and sceptical society, where to 'do God' can feel like breaking a taboo. Put together, the 44 subjects collectively demonstrate that, rather than being all about doctrine and dogma, there are as many ways of exploring faith as there are individuals currently doing it. These intriguing interviews with activists, writers and artists, politicians, rebels and those who have taken vows will appeal to committed believers, those on the fringes of faith, and those who look in from the outside with curiosity.

Peter Stanford's previous investigations into the history, theology, enduring appeal and cultural significance of religious ideas include Martin Luther: Catholic Dissident; Judas: The Troubling History of the Renegade Apostle; The Devil - A Biography; Heaven - A Traveller's Guide to the Undiscovered Country; and The She-Pope, an investigation of the Pope Joan legend. His other books include biographies of Bronwen Astor, Lord Longford and the Poet Laureate, C Day-Lewis, plus the polemical Catholics and Sex that became an award-winning Channel 4 series in 1992. He is a senior features writer at the Daily and Sunday Telegraph titles, and contributes to the Independent, the Observer, the Daily Mail and the Catholic weekly, the Tablet, where he is a columnist. He has presented programmes on BBC 1, Channel 4 and Channel 5, as well as BBC Radios 2 and 4 and the BBC World Service.