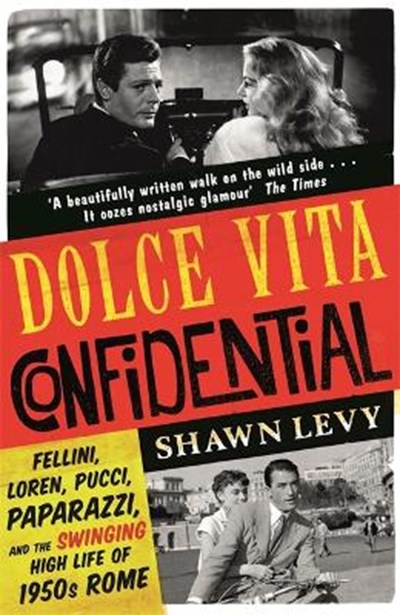 Publisher: Orion Publishing Co
ISBN: 9781474606165
Number of Pages: 480
Published: 22/02/2018
Width: 13 cm
Height: 19.6 cm
Description Author Information Reviews
SUNDAY TIMES FILM BOOK OF THE YEAR 'Uproariously readable ... Levy is a master of the group biography' Sunday Times 'Teeming with satisfying gossipy details' Guardian 'Exalts the intoxicating, beguiling dreaminess of Rome in its celluloid heyday' TLS 1950s Rome. From the ashes of war, the Eternal City is reborn as the epicentre of film, style, boldfaced libertinism and titillating journalism. It's the heyday of fashion icons such as Pucci and Brioni, and the height of 'Hollywood on the Tiber', when a dizzying array of stars flock to Cinecitta, the huge movie studio on the outskirts of Rome. At the bars on Via Veneto the likes of Ingrid Bergman, Audrey Hepburn and Elizabeth Taylor mix with blue bloods and bohemians, while behind them trail street photographers in pursuit of the most unflattering and dramatic portraits of fame. In a fast-paced, kaleidoscopic narrative, Shawn Levy shows how all roads lead to Federico Fellini's world-conquering movie La Dolce Vita, starring Marcello Mastroianni and the Swedish bombshell Anita Ekberg. He recreates Rome's stunning ascent with vivid and compelling tales of its glitterati and artists, down to every last outrageous detail of the city's magnificent transformation.

Shawn Levy is a former film critic for The Oregonian newspaper and the bestselling author of RAT PACK CONFIDENTIAL, PAUL NEWMAN: A LIFE, DOLCE VITA CONFIDENTIAL and THE CASTLE ON SUNSET. His work has appeared in major publications including the NEW YORK TIMES, the LOS ANGELES TIMES, the GUARDIAN, the INDEPENDENT and SIGHT AND SOUND. He lives in Portland, Oregon.