Labyrinth of the Spirits

From the bestselling author of The Shadow of the Wind 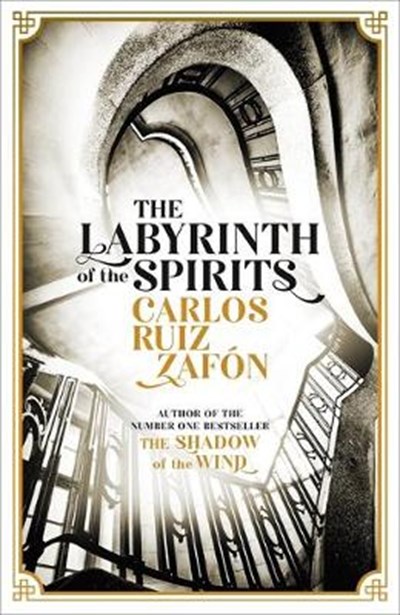 Labyrinth of the Spirits

From the bestselling author of The Shadow of the Wind

Publisher: Orion Publishing Co
ISBN: 9781474606189
Number of Pages: 832
Published: 18/09/2018
Width: 16 cm
Height: 23.8 cm
Description Author Information Reviews
The long-awaited new novel from the author of the global bestseller and modern classic, The Shadow of the Wind. As a child, Daniel Sempere discovered among the passageways of the Cemetery of Forgotten Books an extraordinary novel that would change the course of his life. Now a young man in the Barcelona of the late 1950s, Daniel runs the Sempere & Sons bookshop and enjoys a seemingly fulfilling life with his loving wife and son. Yet the mystery surrounding the death of his mother continues to plague his soul despite the moving efforts of his wife Bea and his faithful friend Fermin to save him. Just when Daniel believes he is close to solving this enigma, a conspiracy more sinister than he could have imagined spreads its tentacles from the hellish regime. That is when Alicia Gris appears, a soul born out of the nightmare of the war. She is the one who will lead Daniel to the edge of the abyss and reveal the secret history of his family, although at a terrifying price. The Labyrinth of the Spirits is an electrifying tale of passion, intrigue and adventure. Within its haunting pages Carlos Ruiz Zafon masterfully weaves together plots and subplots in an intricate and intensely imagined homage to books, the art of storytelling and that magical bridge between literature and our lives. 'For the first time in 20 years or so as a book reviewer, I am tempted to dust off the old superlatives and event to employ some particularly vulgar cliches from the repertoire of publishers' blurbs. My colleagues may be shocked, but I don't care, I can't help myself, here goes. The Shadow of the Wind is a triumph of the storyteller's art. I couldn't put it down. Enchanting, hilarious and heartbreaking, this book will change your life. Carlos Ruiz Zafon has done that exceedingly rare thing - he has produced, in his first novel, a popular masterpiece, an instant classic' Daily Telegraph

CARLOS RUIZ ZAFON is the author of eight novels, including the internationally bestselling and critically acclaimed Cemetery of Forgotten Books series: THE SHADOW OF THE WIND, THE ANGEL'S GAME, THE PRISONER OF HEAVEN and THE LABYRINTH OF THE SPIRITS. His work, which also includes prizewinning young adult novels, has been translated into more than fifty languages and published around the world, garnering numerous awards and reaching millions of readers. He lives in Los Angeles.