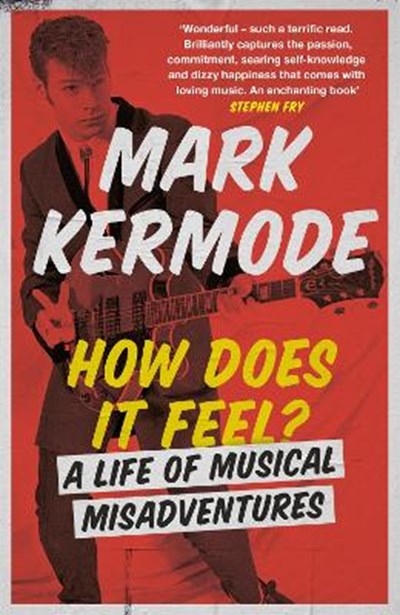 QTY
Add to Basket
Publisher: Orion Publishing Co
ISBN: 9781474608992
Number of Pages: 304
Published: 30/05/2019
Width: 12.6 cm
Height: 19.6 cm
Description Author Information Reviews
'Wonderful - such a terrific read. Brilliantly captures the passion, commitment, searing self-knowledge and dizzy happiness that comes with loving music. An enchanting book' STEPHEN FRY *** Following a formative encounter with the British pop movie Slade in Flame in 1975, Mark Kermode decided that musical superstardom was totally attainable. And so, armed with a homemade electric guitar and very little talent, he embarked on an alternative career - a chaotic journey which would take him from the halls and youth clubs of North London to the stages of Glastonbury, the London Palladium and The Royal Albert Hall. Hilarious and blissfully nostalgic, this is a riotous account of a bedroom dreamer's attempts to conquer the world armed with nothing more than a chancer's enthusiasm and a simple philosophy: how hard can it be? *** 'At the heart of this entertaining memoir is a little boy in his back garden in Finchley, banging out a rhythm on saucepans with a couple of wooden spoons' Daily Mail 'A rocking whirlwind of a tale' DANNY BAKER 'Wonderful . . . will increase your zest for life' RICHARD AYOADE 'Entertaining . . . what comes through every anecdote is the author's genuine enthusiasm for music' Spectator

Mark Kermode is Chief Film Critic for the Observer and co-host of Kermode and Mayo's Film Review on BBC Radio 5 Live. He is the author of IT'S ONLY A MOVIE; THE GOOD, THE BAD AND THE MULTIPLEX; THE MOVIE DOCTORS (with Simon Mayo) and HATCHET JOB, hailed by Stephen Fry as 'the finest film critic in Britain at the absolute top of his form.' He plays double bass and harmonica in The Dodge Brothers, the award-winning skiffle-and-blues band, who also accompany silent movies. He has written and presented film and music shows on Channel 4 and across BBC radio and television. He holds two Sony Awards for his radio programmes, and The Dodge Brothers album The Sun Set was voted Blues Album of the Year 2013 by the roots music magazine Spiral Earth. www.markkermode.co.uk @KermodeMovie