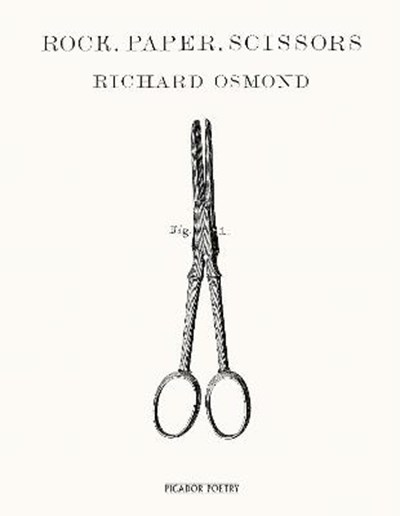 QTY
Add to Basket
Publisher: Pan Macmillan
ISBN: 9781509894581
Number of Pages: 72
Published: 13/06/2019
Width: 12.7 cm
Height: 20.3 cm
Description Author Information Reviews
Richard Osmond won the Seamus Heaney Prize for his widely praised first collection, Useful Verses. His second, Rock, Paper, Scissors, presents an extraordinary, collaged response to the poet's direct experience of the terrorist attack in London on June 3rd, 2017. Osmond has written a powerful and challenging collection of original poems representing the complex, fragmentary nature of traumatic experience. Interleaved with these are translated excerpts of two very different texts: the Qur'an and the Anglo-Saxon epic poem Beowulf. Osmond's translations from the Qur'an, in contrast to the stereotype of the Qur'an as a monolithic book full of judgement and proscription, focus on its vivid lyricism and the surprisingly riddling nature of its philosophy. Meanwhile, the visceral and frightening excerpts from Beowulf echo with unnervingly modern resonances. Rock, Paper, Scissors takes a bold look at the problems of interpretation of texts and of events: in taking every opportunity to keep the complexity of his difficult subject intact, and in his refusal to simplify some of the most urgent questions of the age, Osmond has written a book of compelling importance. Praise for Useful Verses: 'A wonderfully original collection, which relishes and renews everything that poetry can do with language' EDNA LONGLEY

Richard Osmond was born in 1987. He works as a wild-food forager, searching for plants, fruits and fungi among the forests and hedgerows of Hertfordshire. He received an Eric Gregory Award from the Society of Authors in 2017. He is the author of Useful Verses, winner of the Seamus Heany First Collection Prize.