Prayers and Meditations of St. Anslem 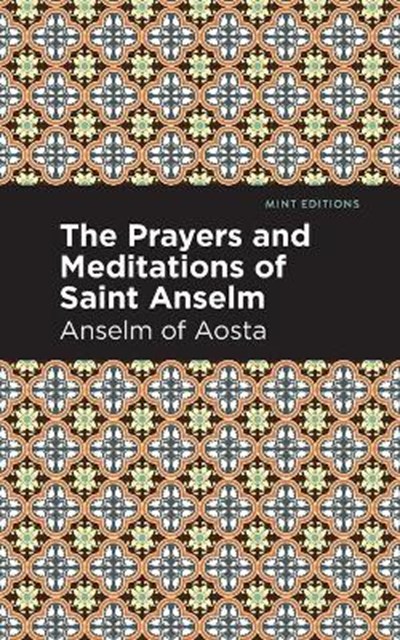 Prayers and Meditations of St. Anslem

QTY
Add to Basket
Publisher: Graphic Arts Books
ISBN: 9781513267852
Number of Pages: 154
Published: 01/06/2021
Width: 12.7 cm
Height: 20.3 cm
Description Author Information Reviews
The Prayers and Meditations of Saint Anselm (1070-1080) is a collection of writings by Anselm of Aosta. Written during his time at Bec Abbey in Normandy, The Prayers and Meditations of Saint Anselm is a deeply personal and meditative work of theology written by a figure whose service as Archbishop of Canterbury is noted for his fierce independence from royal authority and devotion to meaningful reform in the Catholic Church. Included in this collection are Anselm's "Prayer to God," a meditation focused on the Lord's Prayer, and the "Prayer to Christ," a moving piece that addresses the importance of John, Peter, and Mary Magdalene to the Son of God. Apparent throughout The Prayers and Meditations of Saint Anselm are the author's preoccupation with the nature of the soul, the doctrine of original sin, and the mysteries inherent to belief. Often considered the father of scholasticism, an important medieval school of philosophy, Anselm believes foremost in the ability of reason to sharpen and illuminate faith, allowing him to reconcile his Christian identity with his application of Neoplatonism while maintaining the supremacy of the Church and God over all aspects of inquiry. Canonized as a saint following his death in 1109, Anselm has long been recognized as a leader in the medieval Church and as a foundational figure for Christianity in England. With a beautifully designed cover and professionally typeset manuscript, this edition of Anselm of Aosta's The Prayers and Meditations of Saint Anselm is a classic of Christian theology reimagined for modern readers.

Anselm of Aosta (1033-1109) was an Italian monk, philosopher, and theologian who served as Archbishop of Canterbury between 1093 and 1109. Born in Aosta, a city now located in the Republic of Italy, Anselm was raised in a family of Lombard nobles. At 23, having been denied in his wish to enter a monastery, he set off through the Alps on foot to wander across Burgundy and France. In 1059, he arrived in Normandy and, following the death of his father, entered the Benedictine order at age 27. In 1078, he was named Abbot of Bec and began his mission to turn the Abbey into Europe's leading institution for learning. During this time, he composed some of his most influential works on theology, focusing on such topics as truth, free will, Trinitarianism, and the fall of Satan. Following the Norman Conquest of 1066, Anselm was given control of extensive properties in England, the management of which required him to make frequent journeys across the Channel. Anselm was named Archbishop of Canterbury in 1093 and became a fierce advocate for reform in the Church. Noted for his opposition to the English crown, he was exiled twice for several years at a time and spent the final years of his life attempting to establish the dominance of his office over the bishops of York and Wales.