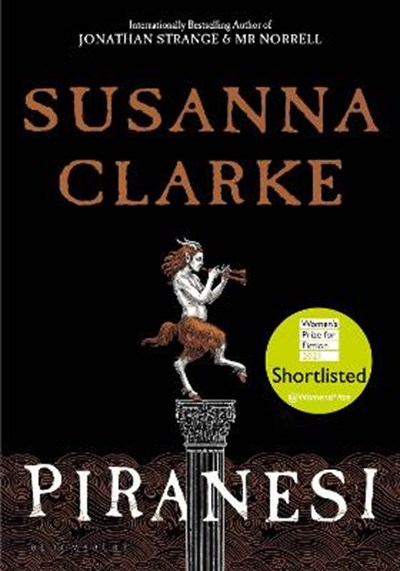 QTY
Add to Basket
Publisher: Bloomsbury Publishing PLC
ISBN: 9781526622426
Number of Pages: 272
Published: 15/09/2020
Width: 15.3 cm
Height: 21.6 cm
Description Author Information Reviews
WINNER OF THE WOMEN'S PRIZE 2021 WINNER OF THE KITSCHIES' 2021 SHORTLISTED FOR THE COSTA NOVEL OF THE YEAR AWARD A SUNDAY TIMES BESTSELLER A NEW YORK TIMES BESTSELLER CHOSEN AS A BOOK OF THE YEAR BY THE THE TIMES, GUARDIAN, OBSERVER, DAILY TELEGRAPH, FINANCIAL TIMES, i PAPER, NEW STATESMAN, SPECTATOR, TIME MAGAZINE, TIMES LITERARY SUPPLEMENT, BBC CULTURE, NETGALLEY AND THE CHURCH TIMES The spectacular new novel from the bestselling author of JONATHAN STRANGE & MR NORRELL, 'one of our greatest living authors' New York Magazine Piranesi lives in the House. Perhaps he always has. In his notebooks, day after day, he makes a clear and careful record of its wonders: the labyrinth of halls, the thousands upon thousands of statues, the tides that thunder up staircases, the clouds that move in slow procession through the upper halls. On Tuesdays and Fridays Piranesi sees his friend, the Other. At other times he brings tributes of food to the Dead. But mostly, he is alone. Messages begin to appear, scratched out in chalk on the pavements. There is someone new in the House. But who are they and what do they want? Are they a friend or do they bring destruction and madness as the Other claims? Lost texts must be found; secrets must be uncovered. The world that Piranesi thought he knew is becoming strange and dangerous. The Beauty of the House is immeasurable; its Kindness infinite. ***** 'What a world Susanna Clarke conjures into being ... Piranesi is an exquisite puzzle-box' DAVID MITCHELL 'It subverts expectations throughout ... Utterly otherworldly' Guardian 'Piranesi astonished me. It is a miraculous and luminous feat of storytelling' MADELINE MILLER 'Brilliantly singular' Sunday Times 'A gorgeous, spellbinding mystery ... This book is a treasure, washed up upon a forgotten shore, waiting to be discovered' ERIN MORGENSTERN 'Head-spinning ... Fully imagined and richly evoked' Telegraph

Susanna Clarke's debut novel Jonathan Strange & Mr Norrell was first published in more than 34 countries and was longlisted for the Man Booker Prize and shortlisted for the Whitbread First Novel Award and the Guardian First Book Award. It won British Book Awards Newcomer of the Year, the Hugo Award and the World Fantasy Award in 2005. The Ladies of Grace Adieu, a collection of short stories, some set in the world of Jonathan Strange & Mr Norrell, was published by Bloomsbury in 2006. Piranesi was a New York Times and Sunday Times bestseller, and shortlisted for the Costa Novel of the Year Award, the Hugo Award and the Women's Prize for Fiction. Susanna Clarke lives in Derbyshire.