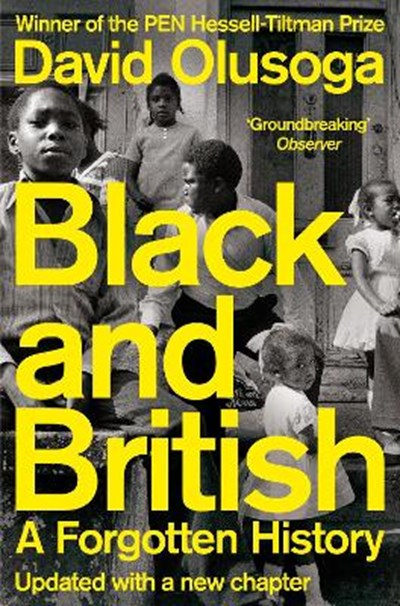 QTY
Add to Basket
Free UK P&P
Publisher: Pan Macmillan
ISBN: 9781529065602
Number of Pages: 640
Published: 10/06/2021
Width: 13.1 cm
Height: 19.8 cm
Description Author Information Reviews
'[A] comprehensive and important history of black Britain . . . Written with a wonderful clarity of style and with great force and passion.' - Kwasi Kwarteng, Sunday Times In this vital re-examination of a shared history, historian and broadcaster David Olusoga tells the rich and revealing story of the long relationship between the British Isles and the people of Africa and the Caribbean. This edition, fully revised and updated, features a new chapter encompassing the Windrush scandal and the Black Lives Matter protests of 2020, events which put black British history at the centre of urgent national debate. Black and British is vivid confirmation that black history can no longer be kept separate and marginalised. It is woven into the cultural and economic histories of the nation and it belongs to us all. Drawing on new genealogical research, original records, and expert testimony, Black and British reaches back to Roman Britain, the medieval imagination, Elizabethan 'blackamoors' and the global slave-trading empire. It shows that the great industrial boom of the nineteenth century was built on American slavery, and that black Britons fought at Trafalgar and in the trenches of both World Wars. Black British history is woven into the cultural and economic histories of the nation. It is not a singular history, but one that belongs to us all. Unflinching, confronting taboos, and revealing hitherto unknown scandals, Olusoga describes how the lives of black and white Britons have been entwined for centuries. Winner of the 2017 PEN Hessell-Tiltman Prize. Winner of the Longman History Today Trustees' Award. A Waterstones History Book of the Year. Longlisted for the Orwell Prize. Shortlisted for the inaugural Jhalak Prize.

David Olusoga is a British-Nigerian historian, author, presenter and BAFTA winning film-maker. He is Professor of Public History at the University of Manchester, the author of several books including Black and British, and a columnist for the Observer, the Voice and BBC History Magazine, also writing for the Guardian and the New Statesman. He presents the long-running BBC history series A House Through Time and wrote and presented the multi-award winning BBC series Britain's Forgotten Slave Owners.