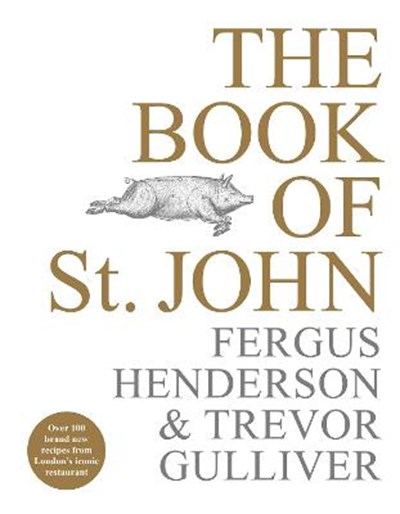 QTY
Add to Basket
Publisher: Ebury Publishing
ISBN: 9781529103212
Number of Pages: 320
Published: 03/10/2019
Width: 19.5 cm
Height: 25.2 cm
Description Author Information Reviews
'The Book of St John is too witty to be a manifesto, but it is a sturdy invocation of the need for comfort, generosity and ritual at the table. And it is a gurglingly delightful compendium of - quite simply - delicious ideas and stories' Nigella Lawson 'An unutterable joy from the team behind one of the most influential and important restaurants in Britain ... This is much more than a book of recipes, though (glorious as they are). It's also about the importance of the table, of feasting, of friendship, of the white cloth napkin on your knee. And it sings of simple but wonderful pleasures: a bacon sandwich and a glass of cider, a doughnut and a glass of champagne.' Diana Henry, The Telegraph 'The Book of St. JOHN, part food gospel, part memoir, part recipe book.' Observer Food Monthly Join the inimitable Fergus Henderson and Trevor Gulliver as they welcome you into their world-famous restaurant, inviting you to celebrate 25 years of unforgettable, innovative food. Established in 1994, St. JOHN has become renowned for its simplicity, its respect for quality ingredients and for being a pioneer in zero waste cooking - they strive to use every part of an ingredient, from leftover stale bread for puddings, bones for broths and stocks, to typically unused parts of the animal (such as the tongue) being made the hero of a dish. Recipes include: Braised rabbit, mustard and bacon Ox tongue, carrots and caper sauce Duck fat toast Smoked cod's roe, egg and potato cake Confit suckling pig shoulder and dandelion The Smithfield pickled cucumbers St. JOHN chutney Butterbean, rosemary and garlic wuzz Honey and bay rice pudding Featuring all the best-loved seminal recipes as well as comprehensive menus and wine recommendations, Fergus and Trevor will take a look back at the ethos and working practices of a food dynasty that has inspired a generation of chefs and home cooks.