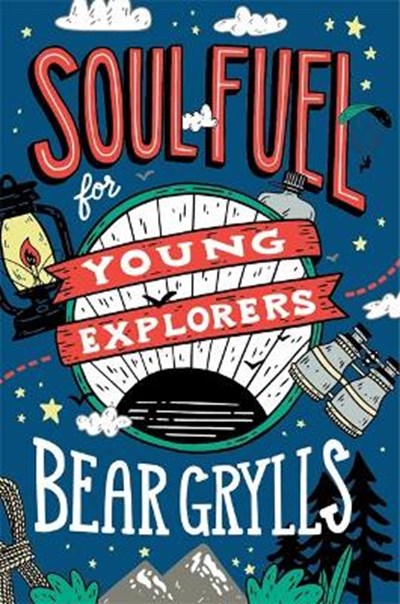 eBook FAQ
Add to Basket
Publisher: Hodder & Stoughton
ISBN: 9781529347746
Number of Pages: 192
Published: 29/10/2020
Width: 13.2 cm
Height: 20 cm
Description Author Information Reviews
TV star, former SAS soldier, Guinness World Record holder, author and the first ever Chief Ambassador to World Scouting, Bear Grylls is an inspiration for youngsters who want to make the most of life's adventures. In his recent bestseller Soul Fuel Bear revealed for the first time the inspiration that helps him to stand strong and find peace each day. Now Soul Fuel for Young Explorers takes his message and inspires children and young people to find courage and confidence in this source too. Bear offers seventy reflections along with stories from his own life -- brilliantly illustrated by Patrick Laurent -- making it a vibrant and engaging devotional for young readers. 'Faith doesn't mean you have to be especially "religious". But, in a nutshell, my faith tells me that I am known, that I am secure and that I am loved - regardless of the storms I may find myself in from time to time, regardless of how often I fall and fail.'- Bear Grylls

Bear Grylls is the author of over 85 books that have sold more than 15 million copies worldwide, including the No. 1 bestselling Mud, Sweat, and Tears. A former Special Forces soldier and Everest mountaineer, Bear starred in Discovery's hit TV series Man vs. Wild for seven seasons, before hosting the National Geographic Channel series, Running Wild with Bear Grylls. This show has seen him take global stars such as Julia Roberts, Ben Stiller and even President Obama on adventures into the wild. Bear has also hosted over six seasons of the BAFTA award-winning series, The Island with Bear Grylls, Hostile Planet for National Geographic, Eco Challenge for Amazon and "You Vs Wild" for Netflix. Bear is a dedicated family man to his wife and three sons, and they live on a barge in London and a remote island off the UK.