Up from the Ashes

A Syrian Christian Doctor's Story of Sacrifice, Endurance And Hope 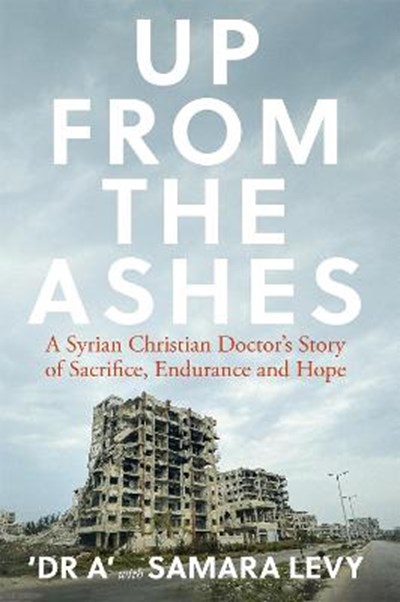 Up from the Ashes

A Syrian Christian Doctor's Story of Sacrifice, Endurance And Hope

eBook FAQ
Add to Basket
Publisher: John Murray Press
ISBN: 9781529358421
Number of Pages: 256
Published: 13/05/2021
Width: 15.6 cm
Height: 23.6 cm
Description Author Information Reviews
In one of the most brutal wars of the twenty-first century, millions of Syrians fled for a safer life elsewhere. Dr A was one of the few medical doctors that stayed. This is the story of a penniless boy, raised in poor family, whose only hope of pursuing his life's dream of becoming a doctor, was to study hard, be the top grade student at his school, to win a scholarship to study free at medical school. Driven by his Christian faith, Dr A risked his own safety, and that of his family, to care for innocent lives caught in the epicentre of a war zone through the most aggressive years of the Syrian war. As his world exploded and collapsed around him, he lost his home and hospital, while his friends, colleagues, relatives and neighbours were either kidnapped or killed, or fled from the country. Yet he remained uncompromising in his commitment to serve his people, through these near-apocalyptic events. After years of service as a doctor, when his turn came for military conscription, Dr A was forced to make one of his toughest decisions yet. To avoid being conscripted, he opted for nearly four years of isolation to evade being found, and was unable to use his skills and experience as a doctor to help those in need. It was there, at his most vulnerable, that Dr A was humbled to a deeper faith rooted in the love and service of Jesus. In spite of his withdrawal from obvious society, he managed to continue supporting his people working through a small and trusted team. Rejoining society after these life-changing years, he emerged with renewed commitment to rebuild the broken world and community he was part of, both challenging and inspiring those around him to pick up the pieces of their lives. Up From the Ashes is a gripping story of sacrifice and endurance - fuelled by prayer and bound by hope.

Samara Levy (Author) Samara Levy is Founder and CEO of Samara's Aid Appeal which provides medical and humanitarian aid in Syria and the Middle East. She has empowered the Church across the UK to respond to the crisis in the Middle East and has helped thousands of displced people who have fled war and terrorism. Samara lives with her husband and two children in the UK.