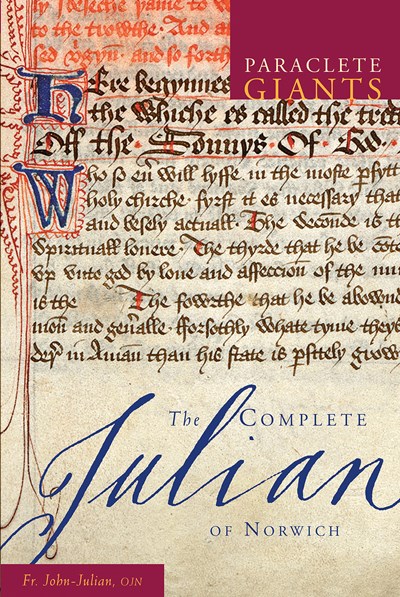 Join now Find out more
Publisher: Paraclete Press
ISBN: 9781557256393
Published: 01/06/2009
Description Author Information Reviews
The most engaging and complete collection available of this 14th century English mystic The Revelations of Julian of Norwich is the first book written in English by a woman - in this case, by a 14th century recluse who recounts the poignant, subtle, and radical insights granted to her in sixteen visions of the crucified Christ as she lay on what was believed to be her deathbed. Julian's miraculous recovery from that illness then led to twenty more years of reflection and contemplation on those revelations and finally to her writing a detailed account of her mystical experience. Her work - in the same Middle English as her contemporary Geoffrey Chaucer - is dense, deeply intuitive, and theologically complex. The Complete Julian is the first book to offer a modern translation of all of Julian's writings (including her complete Revelations), a complete analysis of her work, as well as original historical, religious, and personal background material that helps the reader comprehend the depth and profundity of her life and work. "[Julian's Revelations] may well be the most important work of Christian reflection in the English language." - Rowan Williams, the Archbishop of Canterbury

Father John-Julian, OJN, is an Episcopal priest and monk. He has served parishes in Wisconsin, New Hampshire, and Connecticut, was the founding Dean of the Seminary of the Streets in New York, has taught on the adjunct faculty of the University of Rhode Island and Hampshire College, and served as Director of the Social Service Institute which trained social workers for the State of Connecticut. In 1985 he founded the contemplative, semi-enclosed monastic Order of Julian of Norwich in Wisconsin which incorporates both monks and nuns with equal status under the same traditional vows. He has studied Julian of Norwich each day for over a quarter century. The Complete Julian is the product of over six years of prayerful study and research.