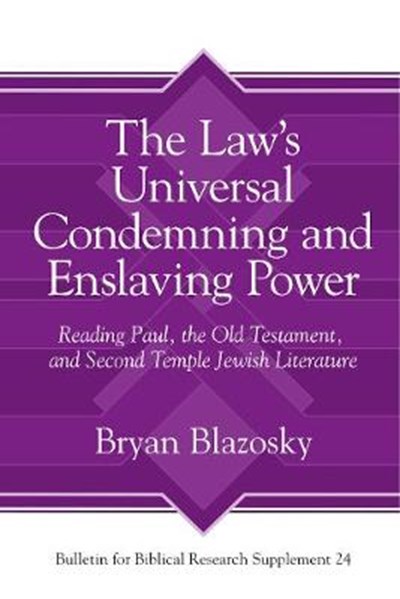 eBook FAQ
Add to Basket
Publisher: Eisenbrauns
ISBN: 9781575069791
Number of Pages: 248
Published: 03/06/2019
Width: 15.2 cm
Height: 22.9 cm
Description Author Information Reviews
While much has been written about the apostle Paul's view on the relationship between Gentile Christians and the Mosaic law, comparatively little attention has been paid to Paul's writings on the laws of Moses and how they apply to Gentile unbelievers. In this book, Bryan Blazosky examines Paul's teaching on the subject and how it relates to the lessons of the Old Testament and literature of the Second Temple period. Blazosky explicates Paul's views on Gentiles and law as they are articulated in the New Testament texts Galatians, Romans, Corinthians, Ephesians, Colossians, and Timothy, and he compares the Pauline perspective to those expressed in other Jewish writings, such as the Old Testament, the third Sibylline Oracle, Liber antiquitatum biblicarum, and 4 Ezra. Through a comparison of these texts, Blazosky finds that Paul-in line with the Old Testament and other Jewish texts-interprets the Mosaic law as having the power to universally condemn. Despite being gifted to Israel, the law's ability to curse, condemn, and enslave reaches beyond its covenantal boundaries. As the first book-length study on the relationship between Gentile unbelievers and the Mosaic law in Pauline literature, The Law's Universal Condemning and Enslaving Power will be welcomed by all who study the New Perspective on Paul, Gentile accountability, and the New Testament.

Bryan Blazosky is Adjunct Professor of New Testament at Bethlehem College and Seminary and a pastor of Richfield Bible Church in Richfield, Minnesota.