A Light for the World, Essays and Reflections on the Papacy of John Paul II 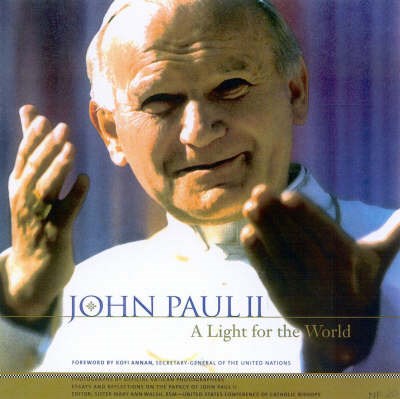 A Light for the World, Essays and Reflections on the Papacy of John Paul II

QTY
Add to Basket
Publisher: Rowman & Littlefield
ISBN: 9781580511421
Number of Pages: 256
Published: 05/11/2003
Width: 26 cm
Height: 26.2 cm
Description Author Information Reviews
When Karol Wojtyla was elected Pope on October 16, 1978, he became the first Slavic Pope in history and the first non-Italian in 455 years. Taking the name John Paul II, the new Pope delivered a message in his first homily in St. Peter's Square that has resounded throughout his entire papacy: "Be not afraid!" Created for the occasion of his twenty-fifth anniversary as Pope, John Paul II: A Light for the World provides a celebration in photographs and words of the courageous pastor who guides more than one billion Catholics and has made his mark on history the world over. Elegantly designed and produced, John Paul II: A Light for the World features over 140 photographs-many of which seldom have been seen outside the Vatican-by official Vatican photographers who have captured the Pope's remarkable life and ministry for two and a half decades. These beautiful photographs are accompanied by selections from the Pope's own speeches and writings as well as essays and personal reflections by scholars and friends that provide insight into the public and private person of Pope John Paul II. Organized into three sections-Pastor, Pilgrim, Prophet-more than forty essays by staff of the United States Conference of Catholic Bishops explore the depth and breadth of the themes central to John Paul's papacy, while nearly thirty personal reflections by cardinals, bishops, and others who have had personal encounters with the Pope reveal his profoundly human, and often humorous, side. A joint effort between the United States Conference of Catholic Bishops, the Catholic Communications Campaign and Sheed & Ward, John Paul II: A Light for the World is the definitive commemoration of John Paul II's twenty-fifth anniversary as Pope. The book opens with a personal greeting from Angelo Cardinal Sodano, Vatican Secretary of State; a foreword by Kofi Annan, Secretary-General of the United Nations; an introduction by Bishop Wilton D. Gregory, president of the USCCB; and a historical sketch by John Thavis, Rom

Sister Mary Ann Walsh, RSM, was a Sister of Mercy and editor of two books, including Benedict XVI: Essays and Reflections on His Papacy. A frequent commentator on church affairs, she was director of media relations at the United States Conference of Catholic Bishops. She died in 2015.

May be the pick of the crop. Publishers Weekly A splendid gift book of photographs that remind one, as words can scarcely do, just how much this pope has done and has been. The New York Times One cannot turn the pages without being drawn in by the photos... This book captures the breadth and depth of John Paul's ministry, but also his personality. Dallas Morning News John Paul II: A light for the World is a big, handsome volume, lush wih more than 140 rarely seen photographs of the pope's quarter century in service, and full of insight into the courageous pastor who guides more than 1 billion Catholics around the world and who has left an indelible mark on history. -- Norman Shoaf Antelope Valley Press This visually beautiful book is an absolute treasure in how it presents everything the Catholic Church stands for through the life and teachings of Pope John Paul II. The presentation of Catholicism here vibrates with life because it comes from the breath of the very one who was chosen to be Christ for the generations living in this period in history. Catholic Press Association A stunning collection. Catholic Light