An Inside Look at the End of an Era, the Beginning of a New One, and the Future of the Church 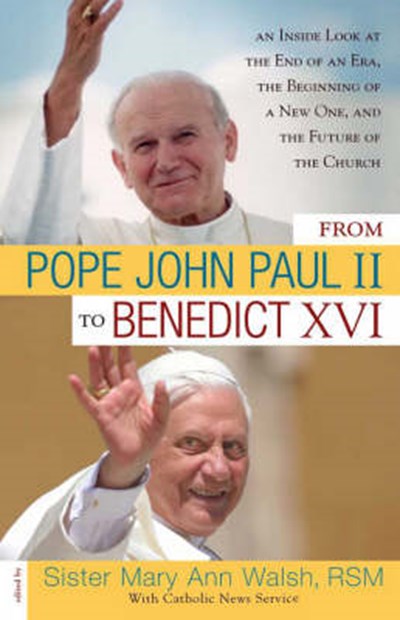 An Inside Look at the End of an Era, the Beginning of a New One, and the Future of the Church

QTY
Add to Basket
Publisher: Rowman & Littlefield
ISBN: 9781580512022
Number of Pages: 224
Published: 10/01/2006
Width: 17.6 cm
Height: 22.3 cm
Description Author Information Reviews
April 2005 marked the end of Pope John Paul II's papacy and the beginning of Pope Benedict XVI's. As countless pilgrims gathered in St. Peter's Square to pray for, and eventually bid farewell to, the pope they had known for 26 years, millions upon millions of Catholics and non Catholics across globe waited for the new pope to be named. As the authoritative and official publication of the United States Conference of Catholic Bishops, From Pope John Paul II to Benedict XVI invites readers to savor this pivotal moment in Church history and to go behind the scenes to better understand the life, death, and legacy of John Paul II; the inner workings of the conclave that elected the new pope; the mind and ministry of Benedict XVI; and the challenges he and the Church face into the future. From Pope John Paul II to Benedict XVI brings together the writings of the Catholic News Service journalists-who spend their lives covering the Catholic Church-with the reflections of seven U.S. cardinals who cast their votes in the papal election, full-color photos by award-winning photographer Nancy Wiechec, and essential charts and timelines that complement the text. It also features writings and speeches by Benedict XVI, as well as reflections by Sister Mary Ann Walsh-the award-winning editor of the best-selling John Paul II: A Light for the World and a frequent national and international TV guest from Rome throughout the papal transition.

Sister Mary Ann Walsh, RSM, was a Sister of Mercy and editor of two books, including John Paul II: A Light for the World, winner of the Popular Presentation of the Catholic Faith Award with the Catholic Press Association. A frequent commentator on church affairs, she was director of media relations at the United States Conference of Catholic Bishops. She died in 2015.

Like a family scrapbook of the momentous events of April 2005. Catholic Light