Aquinas's Neoplatonism in the Summa Theologiae o - A Short Introduction 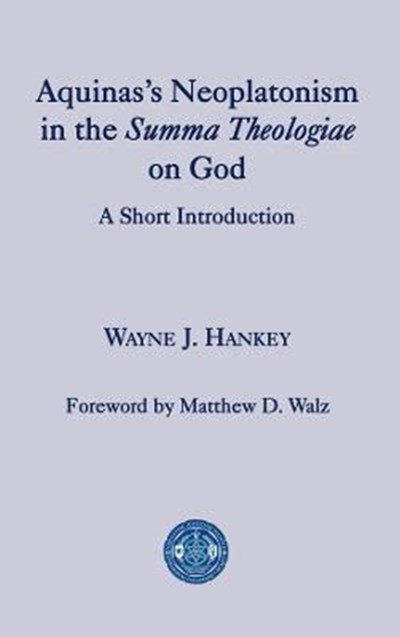 Aquinas's Neoplatonism in the Summa Theologiae o - A Short Introduction

Publisher: St Augustine's Press
ISBN: 9781587310201
Number of Pages: 160
Published: 04/04/2019
Width: 11.7 cm
Height: 18.8 cm
Description Author Information Reviews
This book rises out of Dr. Wayne Hankey's 2015 Aquinas Lecture at the University of Dallas. It explains the Neoplatonic structure and doctrine of St. Thomas's treatment of God in the Summa theologiae with the aim of showing that his doctrine of being is at root both Trinitarian and incarnational. By moving step by step through the questions on God in Himself in the Summa, Hankey demonstrates the circular structures of the Summa theologiae. The meeting of two motioyns, one descending from God by the light of revelation, the other rising from creatures by the light of natural reason, create these. Because Being Itself is self-related and self-affecting in an internal dynamic of self-differentiation, remaining, going out, and return are established as the universal governing structure, within and without. Being generates and includes its own othering. When Thomas's treatment of God in Himself is completed in the Trinity of circularly self-giving infinite subsistences, true being is known as the real giving and receiving of the infinite fullness of reality from itself to itself. This giving and receiving shows Himself open to being touched by us and makes understandable the ceaselessly generous emanation of finite beings, creation.

Wayne Hankey is Professor of Classics at Dalhousie University. He has published four monographs and edited nine volumes as well as sixteen issues of Dionysius, the journal that he edits. His first monograph, God in Himself: Aquinas' Doctrine of God as Expounded in the Summa Theologiae (Oxford University Press, 1987), treated the Neoplatonic sources and structure of the doctrine of God in Thomas Aquinas and is a precursor of the present book. He has published more than one hundred and twenty academic articles and reviews. At present he is writing a monograph on Christian Neoplatonisms.