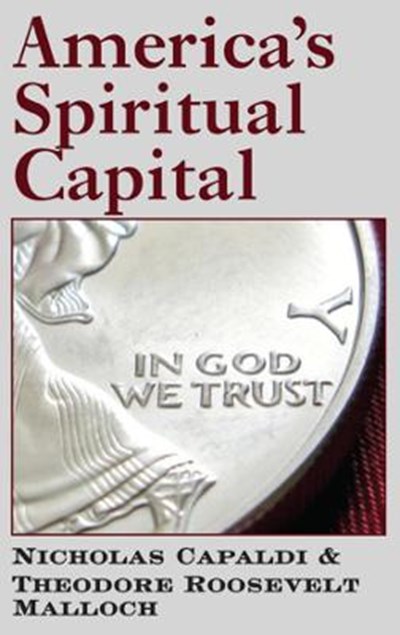 QTY
Add to Basket
Publisher: St Augustine's Press
ISBN: 9781587310379
Number of Pages: 176
Published: 30/06/2012
Width: 16.8 cm
Height: 23 cm
Description Author Information Reviews
This book tells a story, a story about America's spiritual capital. Spiritual capital is the fund of beliefs, examples, and commitments that are transmitted from generation to generation through a religious tradition, and which attach people to the transcendent source of fulfillment and happiness. America has created the greatest civilization the world has ever know, and it has done this because of its spiritual capital, the values and beliefs by which individual Americans have interpreted and transformed the world. The Judeo-Christian heritage has historically served as the spiritual capital of America. It is not only the spiritual quest of modernity, but that quest has evolved into globalization, and America, because of its spiritual capital, has been able to provide leadership for that quest. The larger thesis is that America is by virtue of its specific spiritual capital heritage not only the beneficiary of its advantages but also the leading exemplar of the spiritual quest of modernity. It is because is engaged in a spiritual quest that it can exercise world leadership as opposed to domination and oppression. The authors examine the extent to which economic development, growth, and entrepreneurship depend on spiritual capital. They argue that there is a symbiotic relation between America's spiritual capital and our political institutions and freedoms. The argument here is that the substantive spiritual vision supports the political and economic procedural norms of a free society. Like any form of capital, spiritual capital may lie dormant or be wasted, it may be used productively, it may be augmented, and it may be diminished or eroded. In the final chapter, we point out how the heritage is under assault from a variety of sources and what happens when scientific, technological, economic, and political institutions are detached from their spiritual roots. The result is a natural progression from governmental bureaucratic centralization to secularism to reductive materialism and ultimately to a social-collectivist conception of human welfare. Within the story there is an argument, namely, that these achievements will not be sustained without that heritage, and for all of the above reasons the heritage needs to be reaffirmed. The authors argue that the future of modernity, globalization, and America depend on the extent to which there is a reaffirmation of America's spiritual capital.

Nicholas Capaldi is Legendre-Soule Distinguished Chair in Business Ethics at Loyola University, New Orleans. He also serves as Director of the National Center for Business Ethics. He is the author of seven books, over 80 articles, and editor of six anthologies. He is a member of the editorial board of six journals and has served most recently as editor of Public Affairs Quarterly. Theodore Roosevelt Malloch is Chairman and Chief Executive officer of The Roosevelt Group, a leading strategic management and thought leadership company. His most recent books are: Spiritual Enterprise: Doing Virtuous Business, Encounter Books 2008 (over 25,000 copies sold) and Renewing American Culture: The Pursuit of Happiness, 2006, with Scott Massey, which has been made into an Emmy-nominated PBS documentary.