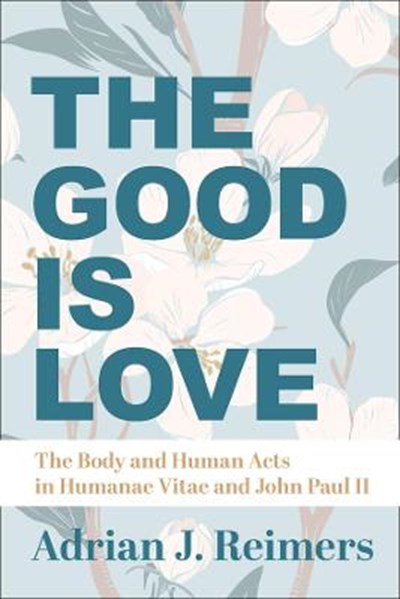 QTY
Add to Basket
Publisher: St Augustine's Press
ISBN: 9781587313387
Number of Pages: 300
Published: 06/07/2020
Width: 15.9 cm
Height: 23.5 cm
Description Author Information Reviews
John Paul II in his personalist approach to moral questions reaffirmed that as sin offends that which is good, if we truly know what human love is--and that it is good--we would thereby see how certain acts can never be acceptable insofar as they in all cases wound this love. Yet in moral debates surrounding love, sex and contraception Adrian Reimers observes that we are not using this approach and these debates are not advancing the cause of real love. Reimers draws upon the encyclical Humanae Vitae and John Paul II's catechesis known as the theology of the body to respond to the stalled development of moral theology on the issues most crucial to human love and intimacy. "It is time, we are told, for a 'paradigm shift' in the Catholic Church's moral teaching, such shift representing a more pastoral and less dogmatic approach to moral issues," writes Reimers. His claim that "a paradigm shift in moral theology and philosophy may be valuable--perhaps vital--to scholars who think and write about these sciences and to teachers who communicate moral truth" is not an exhortation to redefine moral truths. Rather, he argues that an approach to contraception, for example, that relies exclusively on natural law is a hackneyed one and often "tedious." John Paul II's series of catechetical addresses known as the theology of the body was originally composed in the 1970s after Paul VI's encyclical Humanae Vitae. Albeit derived from the writing of an archbishop and not yet pope, Reimers identifies John Paul II's perspectives on love, sex and contraception as an essential force behind this so-called paradigm shift in continuity with the profound and unchanging truths set forth in Humanae Vitae. As Reimers states, "Moral truths do not change, even if our ways to understand them improve." How, then, is our sense of the goodness or badness of contraception meant to be helped by such a development of thought? Ethics grounded philosophically tends to lean toward legalism in the context of moral actions, says Reimers, as it emphasizes conformity to God's law and largely overlooks "the relationship between moral behavior and the human person's ultimate end of beatitude with God." The important principle of the necessarily two-fold description that natural law gives to sex--namely, as unitive and procreative--must not be the authoritative end of the discussion regarding the moral nature of contraception. In an age where technology has given human beings new power it seems there must be new rules as well, and the conquest of procreative acts changes the human perception of the limitations once associated with harmful acts. Herein lies the importance of John Paul II's catechesis--the goodness or badness of acts is not just concerned with end of a particular act. As Reimers writes, "If we are to understand the complex relationships among love, marriage, and their sexual expression, we must situate these within the context of the end of the human being." A position on contraception and human sexuality cannot be comprehensive without a concept of love properly understood. Human acts must bring us closer to sanctity, not to comfort or possession. Holiness is the perfection of love, and its pursuit aims at ultimate beatitude. This end, the truest love human can know, is the end which ultimately condemns contraception once and for all, as "contracepted sex is contrary to holiness." Reimers unpacks this sometimes difficult truth in eight chapters, which begin with love and conclude with faithfulness to moral norms and a spirituality of marriage. The arguments surrounding contraception and "good sex" seem to have set the grounds for coherently choosing a side rather than to have succeeded in presenting certain human acts as definitively immoral. As Reimers notes, a natural law position on contraception often fails to employ its greatest ally: the reality of authentic human love and "victory" of the individual in one's sanctity as achieved through that love. This work will reorient the objectives and claims of the moral debate, as well as influence the popular notion of what love is and what it cannot be. It is an aid to scholars, students and study groups, humanists, and those who seek to deepen the sense of love's highest physical expression.

Adrian Reimers is author of numerous works on the personalist and theological thought of John Paul II, including Karol Wojtyla's Personalist Philosophy: Understanding 'Person and Act' (co-authored with Miguel Acosta, CUA Press 2016). He taught in the departments of theology and philosophy at the University of Notre Dame for eighteen years after completing his doctoral studies in Lichtenstein and Austria (International Akademie fur Philosophie, 1989). He has given lectures internationally, most notably at the Pontifical University of John Paul II in Krakow, Poland, where he is a member of the Scientific Council, Analecta Crocoviensia, and serves on the editorial board of Logos i etos, Theological Research, and Spo[t]ecze'nstwo: Rodzina.