Light of Reason, Light of Faith - Joseph Ratzinger and the German Enlightenment 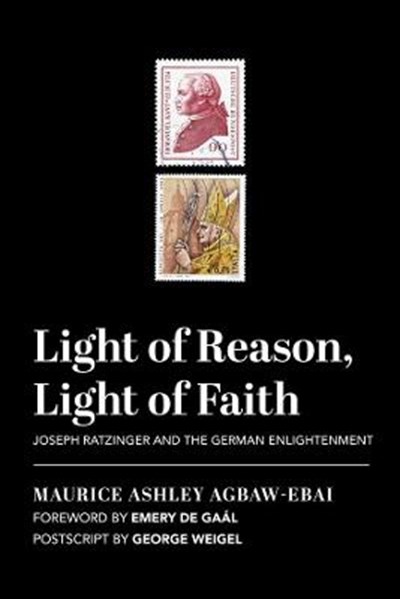 Light of Reason, Light of Faith - Joseph Ratzinger and the German Enlightenment

eBook FAQ
Add to Basket
Publisher: St Augustine's Press
ISBN: 9781587314667
Number of Pages: 380
Published: 26/03/2021
Width: 16 cm
Height: 24.2 cm
Description Author Information Reviews
Fr. Maurice Ashley Agbaw-Ebai, a native of Cameroon, has written a fresh, exciting new study of the lifelong engagement of Josef Ratzinger, later Pope Benedict XVI, with the German Enlightenment and its contemporary manifestations and heirs. Contemporary European disdain for organized religion and the rise in secularism on that continent has deep roots in the German Enlightenment. To understand contemporary Europe, one must return to this crucial epoch in its history, to those who shaped the European mind of this era, and to a study of the ideas they espoused and propagated. These ideas, for good or for ill, have taken hold in other parts of the modern world, being incarnated in many minds and institutions in contemporary society and threatening to enthrone a disfigured rationality without faith or a sense of Transcendence. Ratzinger's extraordinary and sympathetic understanding of the sources of contemporary secularism equipped him to appreciate the gains of the Enlightenment, while still being a fierce critic of the losses humanity has suffered when reason falsely excludes faith. Fr. Agbaw-Ebai's account reveals Ratzinger, in relation to his various interlocutors, to be the truly "enlightened" one because he demonstrates a truly balanced understanding of the human mind. To be truly rational one must be able to hold to faith and reason both, reason informed by faith in Jesus Christ. A particular merit of this book is Agbaw-Ebai's presentation of Ratzinger's treatment of the German Enlightenment's greatest contributors: Kant, Nietzche, Hegel and Habermas, among others. In the postscript George Weigel characterizes what this study accomplishes in the larger framework of scholarship. "[Ratzinger's] position remains too often misunderstood, and sometimes deliberately misinterpreted, throughout the whole Church. And to misunderstand, or misinterpret, Ratzinger is to misunderstand or misinterpret both the modern history of theology and the Second Vatican Council." Agbaw-Ebai masterfully positions Ratzinger correctly in the history of ideas, and exhibits why Ratzinger will be remembered as one of its main players. Pure rationalists and true believers are equally indebted to him.

Maurice Ashley Agbaw-Ebai is a priest of the Diocese of Mamfe, Cameroon. He currently teaches courses in Systematic Theology and Philosophy of Religion at Boston College, Newton MA, and St John's Seminary, Brighton MA. He also serves at St Anne's Parish, Salem MA, Roman Catholic Archdiocese of Boston, and is also the Chaplain of the Cameroon Catholic Community of the Archdiocese of Boston. He had served the Diocese of Mamfe, Cameroon, as the Diocesan Chancellor, the Diocesan Finance Administrator and the Private Secretary to the Bishop.