Treatise on Law - The Complete Text 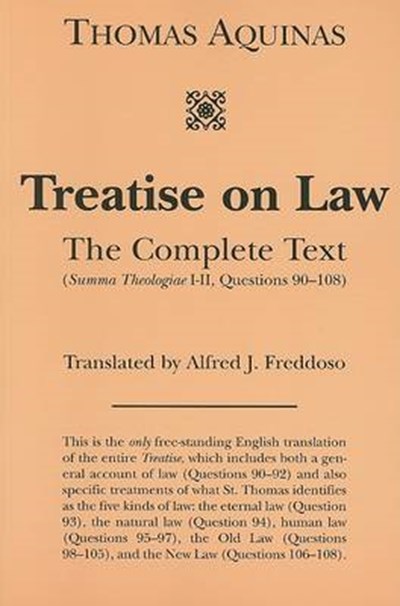 Treatise on Law - The Complete Text

Publisher: St Augustine's Press
ISBN: 9781587318801
Number of Pages: 304
Published: 01/06/2009
Width: 15.6 cm
Height: 22.8 cm
Description Author Information Reviews
This is a new English translation of St. Thomas Aquinas's Treatise on Law, found in Questions 90-108 of the First Part of the Second Part of the Summa Theologiae. In fact, it is the only free-standing English translation of the entire Treatise, which includes both a general account of law (Questions 90-92) and also specific treatments of what St. Thomas identifies as the five kinds of law: the eternal law (Question 93), the natural law (Question 94), human law (Questions 95-97), the Old Law (Questions 98-105), and the New Law (Questions 106-108). All other extant editions of Treatise on Law stop with the human law, and are thus approximately one-third the size of the full Treatise. St. Thomas's account of law is firmly embedded within a general moral theory that begins with a rich conception of human flourishing, i.e., the good for human beings (Questions 1-5). This good consists, first and foremost, in our ultimate and intimate union with the Persons of the Blessed Trinity - a union that in our present state we can grasp intellectively and pursue affectively only with God's supernatural assistance. It is within this framework that we order our loves and pursue the more proximate goals they open up to us as human beings in this life. Given the appropriate goals, the next question is how we can get from where we are, in the grips of the consequences of Original Sin, to where we want to be. The answer is: by means of (a) human actions that are good, i.e., rightly ordered toward our ultimate end and (b) the habits that these actions either engender or flow from. In analyzing human actions (Questions 6-21) and their relation to the passions (Questions 22-48), St. Thomas gives a general account of what he calls the 'intrinsic principles' of human actions and their associated habits - both virtues (Questions 49-70) and vices (Questions 71-89). It is only then that he turns to what he calls the 'extrinsic principles' of good human actions, viz., law (Questions 90-108) and grace (Questions 109-114). According to St. Thomas, law, far from supplanting virtue as a basic principle of action, serves as an independent principle of action that complements virtue and is itself capable of being factored into practical deliberation. The reason is that all of God's precepts, prohibitions, and punishments are aimed at promoting the good of the whole universe and, more particularly, the good for human beings, both individually and within the various forms of social life. Because of this, law serves as both a restraint on bad actions and a spur to good action, i.e., a restraint on actions that take us away from virtue and genuine human flourishing and a spur to actions that promote virtue and flourishing. There are many benefits of having the whole treatise rather than just the first few questions, as has been the standard practice in previous editions of the Treatise on Law. To mention just a few of these benefits, the question on the moral precepts of the Old Law (question 100) helps to illuminate in many different ways the earlier questions on natural law and human law (questions 94-97). Again, the questions on the ceremonial and judicial precepts of the Old Law (questions 101-105) demon-strate in depth the symbiotic relationship that St. Thomas takes to obtain between the Old Testament and the New Testament. The questions on the New Law provide an introduction to the Christian way of life that will be described in incomparable detail in the Second Part of the Second Part, the bulk of which is structured around the treatment of the three theological virtues and the four cardinal virtues.

Alfred J. Freddoso teaches philosophy at Notre Dame and is an outstanding translator of medieval Latin. From reviews of previous translations by Alfred J. Freddoso: Francisco Suarez, On Efficient Causality: Metaphysical Disputations 17, 18, and 19 (Yale University Press, 1994): "Freddoso is medieval philosophy's best and most prolific translator. Here, as in his earlier works, the English is both clear and faithful to the original." - The Philosophical Review William of Ockham, Quodlibetal Questions (with Francis Kelley) (Yale University Press, 1991): "These volumes are the first in the Yale Library of Medieval Philosophy. . . . It is an auspicious beginning." - The Philosophical Review "[This serves] to indicate the brilliance of the translators at understanding the intricacies and subtleties of medieval scholastic Latin, and their sensitivity to modern readers' needs and problems." - The Thomist "The translation is excellent." - Manuscripta Luis de Molina, On Divine Foreknowledge: Part IV of the Concordia (Cornell University Press, 1988): "To refer to this volume as Freddoso's 'translation' of Molina is correct but woefully inadequate." - Faith and Philosophy "Freddoso's translation and introduction are, quite simply, splendid pieces of work." - International Philosophical Quarterly Ockham's Theory of Propositions: Part II of the Summa Logicae (with Henry Schuurman) (Notre Dame Press, 1980; reprinted St. Augustine's, 1998): "Well executed . . . a superb effort, worthy of the attention not only of historians but also of anyone seriously interested in philosophical semantics." - Philosophical Review Francisco Suarez, s.j. , On Creation, Conservation, and Concurrence: Metaphysical Disputations 20, 21, and 22 (St. Augustine's Press, 2002) "Freddoso is a first-rate translator of this material, and his rendering manages to be both literal and elegant."- Journal of Theological Studies "Freddoso is extraordinarily careful here (as in other translations) to make the text as clear as possible to non-Latin readers. . . . The translation itself is close, accurate, and concise." - Theological Studies