What Does It Mean to be a Christian? - A Debate 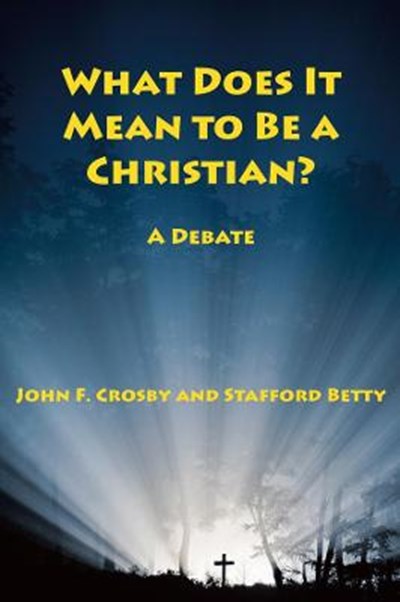 What Does It Mean to be a Christian? - A Debate

QTY
Add to Basket
Publisher: St Augustine's Press
ISBN: 9781587319365
Number of Pages: 240
Published: 20/06/2019
Width: 14.9 cm
Height: 24.7 cm
Description Author Information Reviews
This book presents a correspondence between two friends who disagree about how to answer the question, "What does it mean to be a Christian?" Crosby argues that Christians understand themselves as hearing a definitive word of revelation spoken by God and intended for all human beings. But Betty sees Christianity as one of several options, usually the preferred way for those born in the faith, but no more unique or special than Hinduism or Buddhism. It is a debate over the kind of initiative the Christian God takes, or does not take, toward human beings. Throughout the debate Crosby alleges that Betty's God is a very finite god, an all-too-human god, and for that very reason is something different from the God venerated by Christians, while Betty maintains that his theism remains within the Christian orbit and is a much needed corrective to a religion with exclusivist tendencies.The debate between the two friends is presented here in the form of a correspondence they conducted over a period of two years (and did not originally intend for publication). It has undergone very little editing and revision; the authors have wanted to preserve the spontaneous give and take of their exchange. Together they have produced a work of philosophical dialogue that is unusually fruitful in its ability to clarify some fundamental issues of religion.

John Crosby is Professor of Philosophy at Franciscan University of Steubenville, and is known for his writings on Christian personalism and the philosophy of religion. Stafford Betty is Professor of Philosophy and Religious Studies at California State University, Bakersfield, and specializes in Asian religious thought and the mind-body problem as it relates to death and the afterlife.