Story of the Philadelphia Eleven 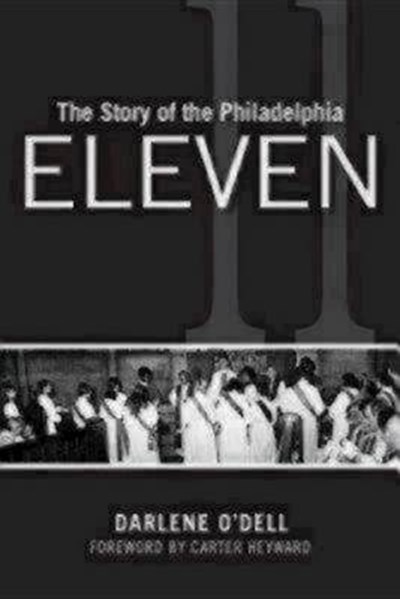 Story of the Philadelphia Eleven

Join now Find out more
Publisher: Seabury Books
ISBN: 9781596272583
Number of Pages: 264
Published: 10/05/2014
Width: 15.2 cm
Height: 22.9 cm
Description Author Information Reviews
On the 40th anniversary of the irregular ordination of the group of women who became known as the "Philadelphia Eleven," Darlene O'Dell introduces us to the women involved, the paths that brought them together on that that momentous day - and what has changed (or not changed) in the life of the church over the intervening years. This is the first book to document the story in first-person interviews. It includes a Foreword by Carter Heyward.

Darlene ODell publishedSites of Southern Memory: The Autobiographies of Katharine Du Pre Lumpkin, Lillian Smith, and Pauli Murraywith the University Press of Virginia in 2001 and the novelI Followed Close behind Herwith Spinsters Ink in 2003. Shehas also published inCobblestone, written headnotes forThe Pearson Custom Library of American Literature, and served as the National Park Services head writer for Jamestown Archaeology. She has taught at Clemson University and the College of William and Mary and currently lives in Brevard, North Carolina. Carter Heyward graduated from Union Theological Seminary in New York City (MA 1971, MDiv 1973, PhD 1980), Danforth Scholar, 1978-80, She was among the first group of women ordained in Philadelphia in 1974. Heyward taught at Episcopal Divinity School, 1975-2005, and has been honored with distinguished Alumae Awards from Randolph Macon Woman's College and Union Theological Seminary. She lives in Cedar Mountain, North Carolina. She is author or editor of 13 books including Keep Your Courage and The Spirit of The Lord is Upon Me, Seabury Books, and several hundred articles (both scholarly aEURO" eg, Journal of Feminist Studies in Religion, and popular aEURO" eg, The Witness, Christianity and Crisis).