Margaret and the Pope Go to Assisi 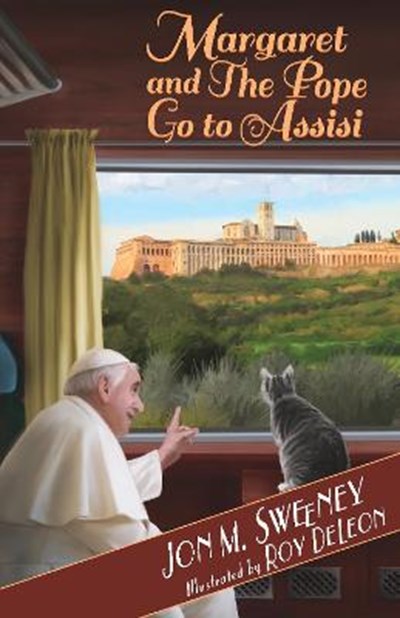 Margaret and the Pope Go to Assisi

Join now Find out more
Publisher: Paraclete Press
ISBN: 9781640601703
Number of Pages: 64
Published: 03/03/2020
Width: 14 cm
Height: 21.6 cm
Description Author Information Reviews
In this fourth installment of "The Pope's Cat" series, Margaret and the Pope travel for the first time together away from the Vatican and out of Rome. They go by train to the Umbrian hill town of Assisi, a place of pilgrimage for Christians all over the world who want to remember the life of St. Francis of Assisi. Together they visit the great Basilica named for St. Francis, greet Franciscan friars at the monastery, attend a World Day of Prayer for Peace, meet religious leaders (each, it seems, with a very different hat!) from around the world, and see evidence of the spirit of St. Francis all over town. Most of all, the Pope shows his love and care for his vulnerable creature friend, as at the beginning of the book when someone from the Curia has frightened Margaret and she's hiding in a closet in the Pope's apartment. "Don't worry, il mio amore." (Il mio amore means "My love.") "People can be so fussy, can't they?" the Pope says, picking her up in his arms.

Jon M. Sweeney's popular history, The Pope Who Quit, was optioned by HBO. In addition to The Pope's Cat series for children, he's the author or translator of many other books including The Complete Francis of Assisi, and Francis of Assisi in His Own Words: The Essential Writings, often used in classes, book groups, and for individual study by people around the world wanting to know more about St. Francis of Assisi. Jon lives in Milwaukee with his wife, daughters, and cats. Roy DeLeon is an Oblate of St. Benedict, a spiritual director, a workshop facilitator focused on creative praying, an Urban Sketcher, and a professional illustrator. In addition to illustrating The Pope's Cat series, he is also the author of Praying With the Body: Bringing the Psalms to Life. He lives in Bothell, Washington, with his wife, Annie.