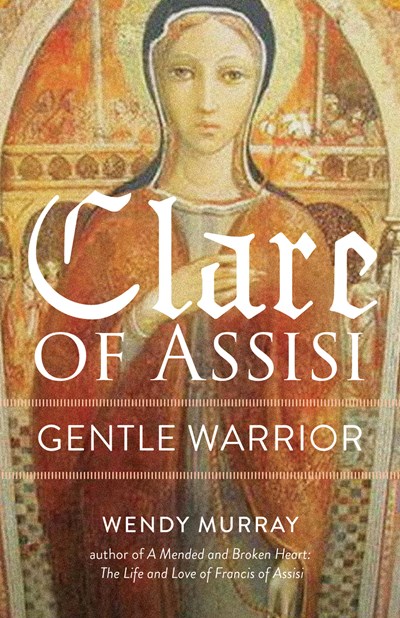 Join now Find out more
Publisher: Paraclete Press
ISBN: 9781640601833
Number of Pages: 208
Published: 22/09/2020
Width: 14 cm
Height: 21.6 cm
Description Author Information Reviews
Clare of Assisi is generally known as "the female friend" of Saint Francis of Assisi and for centuries her legacy has remained obscured by his shadow. Yet Clare's life and story ought to shine in its own light and on its own terms (her name, after all, means "light"). She is a figure of true heroism, tenacity, beatitude and grit who plotted her improbable course in the context of the raucous and explosive period of the Middle Ages. Much went wrong for Clare after the day when, as a teen, she fled the home of her noble and wealthy family to follow Francis in a life of poverty. No one would have begrudged her if, when the trials had become onerous, she had decided simply to "go home." Yet she stayed the course, even after Francis had died. She pulled from the fire of her trials embers that would become her crown. In this new book, Wendy Murray digs deeply into Clare's decision to abandon rank and wealth for allegiance to Christ (and in no small way, Francis) and explores the circumstances which, later on, tested Clare's devotion. Clare's curious and vivid spiritual vision galvanized her ability to persevere amid difficult circumstances and enabled her to stay her course and lay claim to a legacy that shines brightly among the host of medieval saints.

Wendy Murray was living in Assisi, Italy when she completed the book A Mended and a Broken Heart, the Life and Love of Francis of Assisi (Basic Books, June 2008). She spent nearly five years researching the lives of Saint Francis and Saint Clare, a large portion of which was undertaken on site in Italy. She is respected among the Catholic (Franciscan) community in Assisi and has intimate access to the most learned scholars and experts and maintains good standing among the city's primary librarians. A Mended and a Broken Heart has been officially endorsed by the Franciscan community in Assisi and is carried in the town's major bookstores. (Millions of English-speaking pilgrims visit Assisi every year.) She is knowledgeable of Latin and conversant in Italian. Beyond her work in Italy, she is otherwise a well-traveled and award-winning journalist who has published widely in many venues. She grew up in Chagrin Falls, Ohio and earned a Bachelor of Arts degree from Hiram College, Hiram, Ohio (1980), majoring in religion and graduating magna cum laude. She also received membership in Hiram's Phi Beta Kappa society. She completed a master's degree in theological studies (New Testament) at Gordon-Conwell Theological Seminary, S. Hamilton, Massachusetts, graduating magna cum laude in 1985. She lived in Honduras, Central America for four years where she served as regional correspondent for Time magazine. She worked as writer and associate editor at Christianity Today magazine from 1995 to 2000 and served as senior writer through 2004. Her work has taken her all over the world and her feature essays have won awards consistently. David Neff, then-executive editor at CT, said of her work: "Wendy has brought a keen sense for the emotional center of a story. No story is just about facts, and journalism that sticks to bare facts does a disservice to its readers. In journalism, as in life, every significant event and every person worth writing about is gifted with the power to serve as a warning or an inspiration, to motivate, to model, to repel, to reveal. Journalism that taps into that power is risky, and we thank her for her determination to take those risks." She has published extensively in other journals, including Books & Culture, The Christian Century, and Beliefnet.com and currently has a column titled "Poets & Lunatics" on the religious website Patheos.com. Twice her essays have been included in The Best Christian Writing, edited by John Wilson. She was cited in Brill's Content as being numbered among the nation's leading religion reporters. She has appeared on "Chris Matthew's Hard Ball," "Religion & Ethics Newsweekly" and was invited to speak before a select group of thought leaders by the Carnegie Council in New York. She served as writer-in-residence at Gordon College (Wenham, Massachusetts) for two years (2004 to 2006) and has taught courses on Francis of Assisi, both in Massachusetts and through the college's international studies program in Orvieto, Italy. She also served as an adjunct professor of Communications through 2011. She has written eleven books, including The Beliefnet Guide to Evangelical Christianity (Doubleday, 2005), Meet Me in Managua (Kregel, 2005); On Broken Legs (NavPress 2004) and Day of Reckoning: Columbine and the Search for America's Soul (Brazos, 2001); and A Mended and a Broken Heart: The Life and Love of St. Francis of Assisi (2008).