How the Mass Changed the Life of the First Christians 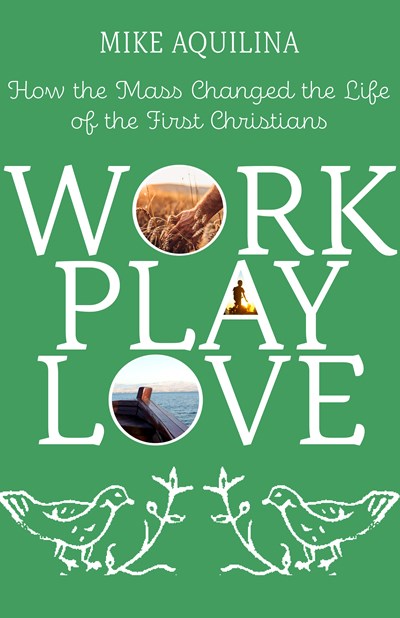 How the Mass Changed the Life of the First Christians

Join now Find out more
Publisher: Paraclete Press
ISBN: 9781640604254
Number of Pages: 128
Published: 18/02/2020
Width: 11.4 cm
Height: 17.8 cm
Description Author Information Reviews
"Christians make the Mass, and the Mass makes Christians." So said the Martyrs of Abitina, North Africa, in A.D. 304. The Mass was the reality most essential to the life of believers, and it deeply affected everything they did. In Work Play Love popular author Mike Aquilina shows how the Eucharist shaped three basic dimensions of life for the early Christians. Work. Christians brought the fruits of their labor to the altar-not only bread and wine, but also cheese, olives, honey, dried fish, and freshly pressed oil. As they worshiped, they consecrated the world itself to God. In turn, this affected the way they approached their work. It was not just toil. It was an act of love, undertaken for the Father. They labored in imitation of Jesus the laborer. Made one with Christians in the Eucharist, Jesus worked through them and in them. Play. The Mass was a leisurely, contemplative act, but it was celebrated on a normal workday in the Roman world. It was useless by the standards of the city. And yet it called forth-gently, gradually-the most creative responses. The Mass inspired new forms of music, poetry, architecture, and painting. At liturgy Christians stood back and reconsidered the cosmos from God's perspective. They saw their lives as part of a profoundly new and different narrative. This made for new and different art. Love. Christian ritual demanded personal and communal acts of charity. The earliest descriptions of the Mass show the importance of the collection and its distribution to the poor, the imprisoned, and the home-bound sick. Deacons and deaconesses were dismissed to take Communion to the same people in need. The fruits of the Mass extended beyond the time of liturgy-and the bounds of Christian community. Christians took care even of their persecutors. This led to the establishment of institutions of universal charity, a first in human history. The story of the Mass is not simply a rehearsal of ancient texts. It's a drama of personal and societal transformation. This book tells the story as much as possible in the lively words of the early Christians and draws from the most exciting discoveries of recent archaeology. It is a powerful imaginative encounter with the first generations of our Christian ancestry.

Mike Aquilina is executive vice-president of the St. Paul Center for Biblical Theology and a contributing editor for Angelus News. He has co-hosted many series on the Eternal Word Television Network, and he is author of more than fifty books, including The Fathers of the Church and Villains of the Early Church. He is also a poet and songwriter, whose work has been recorded by Paul Simon and Dion, among others.