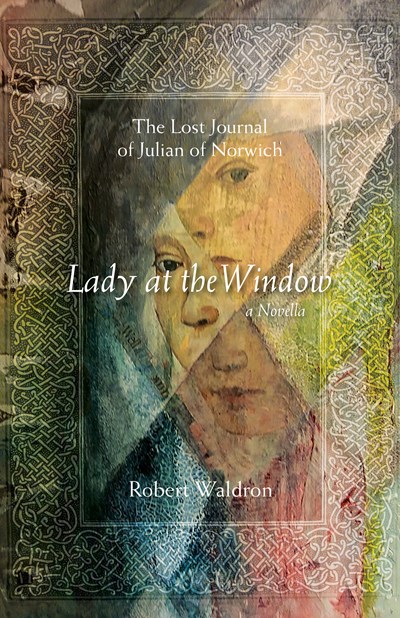 Lady at the Window chronicles the last Holy Week in Julian of Norwich's life.

In her secret journal (because women are forbidden to write in English) the great English mystic chronicles her inner life, including her relationship with the "courteous Lord," who when she was young was a constant presence in her life, but now in her old age feels to be more of a constant absence, Deus Absconditus. There are two windows in Lady Julian's anchorage: one looks upon the interior of St. Julian's Church with its high altar and tabernacle; the other opens onto the city of Norwich with its publicans, sinners, poor, people in the marketplace, and neighbors.

Among these there are those in deep distress who find their way to Lady Julian, now famous for her wisdom and holy counsel. There is the young woman with a child outside of marriage. There is a wounded young soldier, jobless, homeless, and afraid. There is a man who has betrayed his betrothed. And others. No one leaves Julian's window without psychological and spiritual uplifting. But the underlying theme of this novella is Lady Julian's dark night of the soul.

As with other mystics who came after her, e.g. St. John of the Cross and St. Teresa of Calcutta, Julian abides in a cloud of unknowing, praying daily that her darkness be dispelled by divine light.

Robert Waldron is the acclaimed author of twenty books, six addressing the life and work of Thomas Merton, two on Henri Nouwen, and three novels. He is the recipient of four fellowships from the National Endowment for the Humanities. He has also received three First Prize awards from the Catholic Press Association for his articles on modern spirituality. Waldron lives in Boston.

"Waldron (Thomas Merton in Search of His Soul) imagines the lost journal of 14th-century mystic Julian of Norwich in this stirring novella. Julian lived sequestered in her later years as a hermit in the English city of Norwich, and her primary interactions were with her confessor, her servant, and the people who came to her for spiritual direction and wisdom. Julian doles out hopeful advice and questions the traditional Catholic practice of priestly confessions. Composed in secret-as women were forbidden from writing in English at the time-her journal entries display an unabashed defiance of norms, and, in scriptural readings, Julian likens Jesus as a mother rather than a son or father. Covering the last Holy Week before Julian's death, the final entries look back on a life lived amid plagues, war, and despair. Despite the darkness of days, Julian surmises that, with peace and trust in God, "all shall be well, and all manner of thing shall be well." Christian readers will enjoy Waldron's convincing, reflective tale." -- Publishers Weekly

"A deeply sympathetic portrait of this medieval mystic, a wife and mother and anchoress who came to reimagine God as a merciful, nurturing and especially mothering presence. In spite of the Black Plague and endless wars and suffering, a world very much really like what we have experienced in our own time, Waldron takes us through Julian's unsettling meditations during the dark hours of Holy Week, ending with an eastering vision in which we too might find comfort in what she saw: that God is there even in the darkness, and that 'All shall be well, and all manner of thing shall be well.'" -- Paul Mariani, professor, poet, and literary biographer

"In his stunning and convincing imitation of Julian of Norwich's language and thought, Robert Waldron has given us an amazing feat of the imagination that is as inspiring and insightful as Julian's own journal of 'shewings." -- Ron Hansen, author of Mariette in Ecstasy