Walking the Way of Love 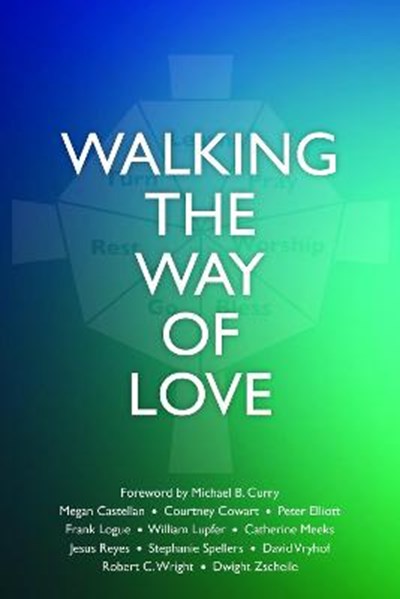 Walking the Way of Love

The presiding bishop's advisors lay out a step-by-step way to nurture a profound friendship with God in Christ. Walking the Way of Love is organized according to seven practices (Turn, Learn, Pray, Worship, Bless, Go, and Rest) and three ways of being (We Seek Love; We Seek Freedom; and We Seek Abundant Life). The wisdom in this book allows people to move from the first tentative stages of wanting an experiential relationship with Jesus to having a real relationship that grows deeper every year. The seven simple practices spelled out in this book-- by highly experienced teachers and practitioners-- will enhance the reader's spiritual growth and open up love, freedom, and abundant life. The stories and wisdom of these advisors will be helpful not just to seekers of faith, but also supportive to faith leaders who are guiding others in their development across the church. Proceeds support The Way of Love Scholarship Fund.

Courtney Cowart, PhD, is the Executive Director of The Society for the Increase of the Ministry (SIM) and part of the Presiding Bishop's council of advice. Formerly the Executive Director of the Beecken Center at the University of the South, Sewanee, she is author of "An American Awakening" and numerous articles. Michael B. Curry, serves the Episcopal Church as its 27th Presiding Bishop. He was the Bishop of North Carolina from 2000 to 2015. He has had a national preaching and teaching ministry, has been featured on The Protestant Hour and Day 1, and is a frequent speaker at conferences around the country. He received honorary degrees from Sewanee and Yale. MICHAEL B. CURRY es el 27. Degrees Obispo Presidente y Primado de la Iglesia Episcopal. Antes de su eleccion en 2015, fue Obispo de Carolina del Norte y se desempeno como parroco en Carolina del Norte, Ohio y Maryland. Curry es el autor de Cristianos locos: un llamado a seguir a Jesus y las canciones que canto mi abuela. The Rt. Rev. Robert Wright is the Bishop of the Diocese of Atlanta. He has also served as rector of St. Paul's Episcopal Church in Atlanta and as a school chaplain and on the staff of the Cathedral of St. John the Divine in New York City. He is the co-author with Donna Mote of "The Go Guide," a book of practical tips for following Jesus into the world. Dwight J. Zscheile is professor of congregational mission and leadership at Luther Seminary and associate priest at St. Matthew's Episcopal Church in St. Paul, Minnesota. Recognized as one of the leading theologians in the Episcopal Church today, Zscheile also serves on the Episcopal Church's Special Task Force on Structure. In addition to People of the Way; he is co-author with Craig Van Gelder of The Missional Church in Perspective, and editor of Cultivating Sent Communities: Missional Spiritual Formation. He lives in North Oaks, Minnesota. Stephanie Spellers serves as Presiding Bishop Michael Curry's Canon for Evangelism, Reconciliation, and Creation, helping Episcopalians to share good news and cross boundaries as part of the Jesus Movement. A former church planter and seminary faculty member, she is the author of Radical Welcome: Embracing God, The Other and the Spirit of Transformation. She lives in New York City. Brother David Vryhoff is an Episcopal priest and member of the Society of St. John the Evangelist, a religious order based in Cambridge, Massachusetts. He serves as the order's Assistant Superior and oversees its popular communications, including www.catchthelife.org and "Brother, Give Us a Word," a daily email offering from the Brothers. The Rt. Rev. Frank Logue is the Bishop of the Diocese of Georgia. He spent a decade as Canon to the Ordinary in the diocese and before that founded King of Peace Episcopal Church in Kingsland, Georgia. A member of the Executive Council of the Episcopal Church, Logue has nurtured church planting and renewal movements across the church. MEGAN CASTELLAN is an ordained Episcopal priest, working extensively across generations within the church. She has marked how the younger generations approach the institution and its ancient traditions with a mix of awe and concern. Part of her ministry, though writing, years as a successful college chaplain, work as a diocesan youth worker, and as a preacher, has been to translate the ancient language of the Church into language that is approachable and inviting for the seekers of today. CATHERINE MEEKS, PhD, is the retired Clara Carter Acree Distinguished Professor of Socio-Cultural Studies at Wesleyan College and the Director of the Absalom Jones Center for Racial Healing. She has long been a strong advocate for social justice, community, and wellness. She is the author of several books, including Living Into God's Dream and Standing on Their Shoulders: A Celebration of the Wisdom of African-American Women. The Rev. Dr. William Lupfer is the Rector of Trinity Church Wall Street in New York City. Before serving at Trinity, Dr. Lupfer was Dean of Trinity Episcopal Cathedral in Portland, Oregon. A former campus minister and prison chaplain, he completed doctoral study on the intersection of parish leadership and spiritual formation. The Very Rev. Peter Elliott is a retired leader in the Anglican Church of Canada. He recently retired from his role as rector of Christ Church Cathedral and Dean of New Westminster. Prior to coming to Vancouver, he was Director of Ministries in Church and Society for the Anglican Church of Canada. The Rev. Canon Jesus Reyes is the Canon for Congregational Development in the Diocese of El Camino Real (Central California). He nurtures mission and multicultural development in congregations at the diocesan and church-wide levels. Prior to serving in El Camino Real, Reyes planted Santa Maria Episcopal Church in Falls Church, Virginia, and ministered extensively in Mexico and Brazil.