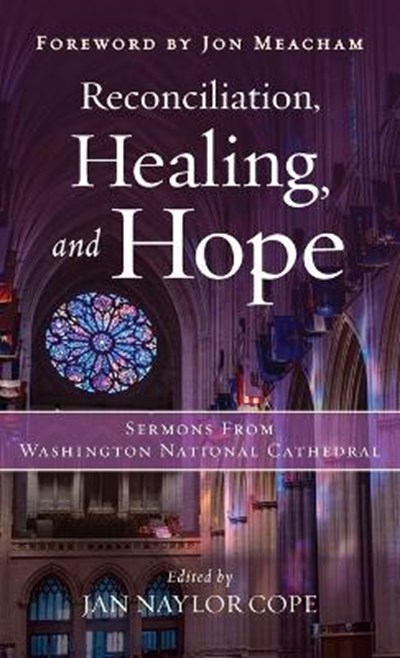 Join now Find out more
Publisher: Church Publishing Inc
ISBN: 9781640654846
Number of Pages: 224
Published: 22/02/2022
Width: 14 cm
Height: 21.6 cm
Description Author Information Reviews
Powerful sermons from Washington National Cathedral in the midst of the pandemic. Through their sermons, Cathedral clergy and guest preachers such as Jon Meacham, Kelly Brown Douglas, and Presiding Bishop Michael B. Curry share inspiring words. Collectively, they offer lasting guidance for difficult times, reinforcing that even in the midst of loss and chaos, God is at work among us, lifting us up and giving us hope for the future. Topics include hope, faith during times of distress, love, grief, and the presence of God. With a foreword by Jon Meacham.

Jan Naylor Cope is the Provost of Washington National Cathedral. Prior to ordination, she served on the senior staff of the White House and later led her nationally recognized executive search firm. She is a frequent guest preacher and speaker nationally and internationally. She lives in Washington DC. Jon Meacham, Pulitzer Prize-winning historian and writer, is the Rogers Chair in the American Presidency and co-chair of the Project on Unity and American Democracy at Vanderbilt University. As Canon Historian of Washington National Cathedral, he preaches and leads public conversations several times a year on issues of faith, spirituality, and civic life. Michael B. Curry serves the Episcopal Church as its 27th Presiding Bishop. He was the Bishop of North Carolina from 2000 to 2015. He has had a national preaching and teaching ministry, has been featured on The Protestant Hour and Day 1, and is a frequent speaker at conferences around the country. He received honorary degrees from Sewanee and Yale. He lives in Raleigh, North Carolina. Randolph Marshall Hollerith is the eleventh Dean of Washington National Cathedral who has reoriented the institution toward radical welcome and hospitality. He grew up in nearby Alexandria, Virginia, often visiting the Cathedral as a boy during its construction. MARIANN EDGAR BUDDE is the ninth bishop of the Episcopal Diocese of Washington and serves as president of the Protestant Episcopal Cathedral Foundation. Prior to this, she served as rector of St. John's Episcopal Church in Minneapolis. She earned her masters in divinity and doctor of ministry degrees from Virginia Theological Seminary. The author of Gathering the Fragments: Preaching as Spiritual Practice, her sermons have been published in books and journals. Kelly Brown Douglas is an Episcopal priest and graduate (Master of Divinity degree, doctoral degree) of Union Theological Seminary in New York City where she is now inaugural Dean of Episcopal Divinity School at Union Seminary. She lives in New York City. Dana Colley Corsello is the Canon Vicar of Washington National Cathedral and leader and pastor to the Cathedral Congregation. Previously, she served as the Rector of St. Luke's Episcopal Church, San Francisco, where she was called to resurrect a prominent but dying parish. Leonard L. Hamlin, Sr. is the Canon Missioner and Minister of Equity and Inclusion at Washington National Cathedral. Previously, he served as the Pastor of Macedonia Baptist Church in Arlington, Virginia, for twenty-two years. Rosemarie Logan Duncan is the Canon for Worship at Washington National Cathedral. Prior to ordained ministry, she worked as a church musician and as a clinical psychologist. She is known as a gifted liturgist, strong administrator, and caring pastor. Patrick Keyser is the Priest Associate at Washington National Cathedral. He works with the Canon for Worship in assisting with liturgical planning and with the Canon Vicar in supporting the life of the cathedral congregation, especially with Christian formation and pastoral care.