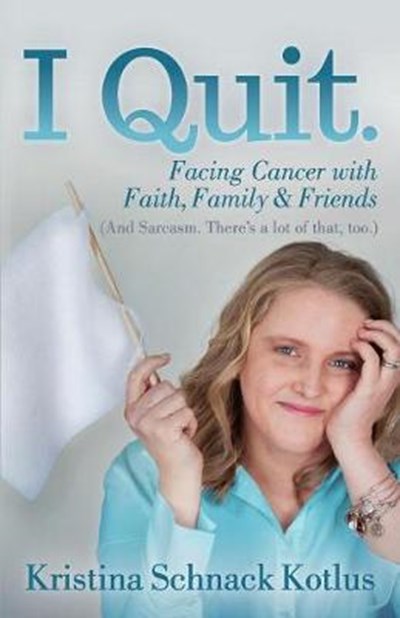 QTY
Add to Basket
Publisher: Morgan James Publishing llc
ISBN: 9781642795318
Number of Pages: 184
Published: 04/02/2020
Width: 13.9 cm
Height: 21.5 cm
Description Author Information Reviews
I Quit is a rallying cry for anyone facing a difficult situation-including two cancer diagnoses-to choose joy and faith and embrace humor to make the best of their experience. There's more to cancer than chemo and radiation. When she found herself diagnosed with brain cancer for the second time, Kristina Kotlus chose to quit on day one. But rather than meaning she gave up, her quitting meant getting a whole new lease on life. I Quit offers readers a chance to do the same. Inside, Kristina shares how she survived both diagnoses with the help of her family, friends, and faith in a relatable, funny way from her original diagnosis to finding doctors to telling her kids (hint: make someone else do it). She shares openly and honestly, with just a touch of sarcasm and a heavy dose of humor and faith and encourages readers to decide that it's time to stand up, wash the tears off their face, and keep going.

Kristina Schnack Kotlus is a two-time brain cancer survivor. She was baptized a Lutheran, tried atheism because of the Anglicans, worked for the Methodists, and now attends an Assemblies of God congregation. She has a degree in Comparative Religion from George Mason University by way of Holy Cross College and is married to a non-practicing Jew. She's written for her own website, PwcMoms, for years, helping parents in Prince William County, Virginia feel more connected to where they live. She's been published in numerous local magazines and newspapers and was recognized as Blogger of the Year in Northern Virginia, 40 Under 40 in Northern Virginia, and an Influential Woman in Prince William County. She resides in Manassas, Virginia, with her husband and three children, who she homeschools.