A True Story of Suicide, Divine Intervention and a Life Transformed 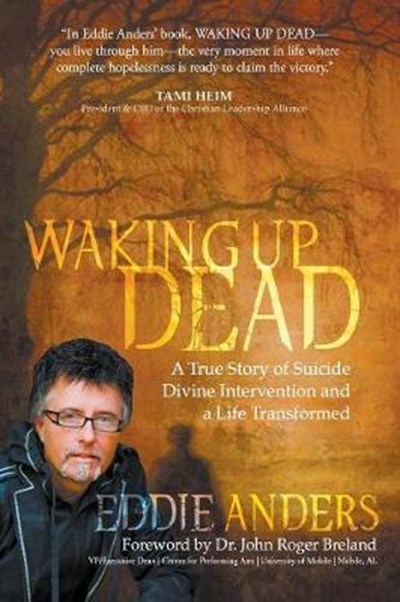 A True Story of Suicide, Divine Intervention and a Life Transformed

QTY
Add to Basket
Publisher: Morgan James Publishing llc
ISBN: 9781683501398
Number of Pages: 300
Published: 04/04/2017
Width: 15.2 cm
Height: 22.8 cm
Description Author Information Reviews
Waking Up Dead is the true story of suicide, divine intervention and a life transformed. A true accounting directly from author and songwriter, Eddie Anders on what he calls his dark night of the soul when life seemed too hard to continue any longer, even though from the outside, it looked as if he had it all. This is more than a memoir and readers are sure to be hooked as he shares in detail all he's learned over a decade concerning what led him to self-destruction and the process of overcoming depression. Written with the goal and hope to rescue as many people as possible from drowning in depression and potential suicide, Waking Up Dead is a powerful read certain to leave audiences moved and aware.

As a studio musician, vocalist, composer and producer, Eddie Anders' vocal and keyboard artistry have been heard by millions on radio & television jingles for Toyota, Pontiac, GMC Trucks, Great Lakes Airlines, the Barksdale Air Show, Dapco Auto Parts, Cadillac & countless more. For nearly three decades, Eddie has performed in major concert halls, theatres, arenas & churches across America and beyond including renowned venues such as The Ryman Auditorium, Massey Hall, and The Bellagio. He has performed as a band member and vocalist for music groups and theatre companies including The Gaithers, Roger Breland & Truth, Daybreak, The Great American Opry, Country Tonite Theatre, Dollywood, and his own award-winning family entertainment venue, Eddie's Heart & Soul Cafe in Pigeon Forge, Tennessee. As a session and touring musician & vocalist, he has performed on stage or in the studio with a wide variety of artists including EmmyLou Harris, Dolly Parton, Steve Lukather, Albert Lee, Phil Keaggy, Percy Sledge, Steven Curtis Chapman, Johnny Rivers, 4Him, James Burton, Amy Grant, Craig Morgan, Bill Champlin, Sam Bush, Eric Johnson, Dann Duff, Steve Cropper, Lenny LeBlanc, and others. In March 2000, Eddie was awarded the prestigious Lifetime Achievement Award by the North American Country Music Association International. He continues an active recording and concert schedule around the country including performing as the Music Director for the James Burton International Guitar Festival. Waking Up Dead is his debut book and his album Alive Again is scheduled for release alongside the book and features guest performances by Steve Lukather of Toto, Michael Omartian, Sam Bush, Tom Hemby, Phil Keaggy, Doyle Dykes, Goerge Marinelli, Danny Seraphine, and Bill Champlin and many others.