An All-American Story of Loving the Least of These 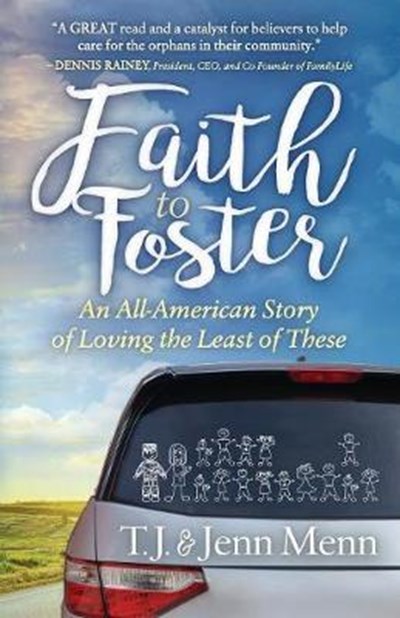 An All-American Story of Loving the Least of These

QTY
Add to Basket
Publisher: Morgan James Publishing llc
ISBN: 9781683505129
Number of Pages: 188
Published: 23/05/2017
Width: 13.9 cm
Height: 21.5 cm
Description Author Information Reviews
Faith to Foster is a candid look into the life of ordinary foster parents TJ and Jenn Menn. It is a journey chronicling their decision making process, how the children arrived, the birth parents struggle to rehabilitate, help from friends and family, emotional goodbyes, and how faith in Jesus empowered them through it all. This is a story they wished they'd read before starting their foster parenting adventure. TJ and Jenn share their experiences and feelings in a way that encourages any reader to serve their neighbors, not just foster parents. Faith to Foster reminds Christians how God can use them to make a difference in their community.

TJ and Jenn Menn have welcomed twenty-three foster children into their home from multiple states across America. The children have ranged from newborns through high school, as well as groups of siblings. TJ is a 2005 graduate of the United States Military Academy at West Point and serves as an Aviation officer in the United States Army. He earned a Master's degree in Public Policy from the John F. Kennedy School of Government at Harvard University. He currently teaches economics at West Point in the Social Sciences Department. He and Jenn met while they were cadets, and married in December, 2005. Jenn graduated from Trinity College of the Bible and is a certified member of the Association of Certified Biblical Counselors. She later received her Master's degree in Public Administration, also from the Kennedy School at Harvard University. The couple continues to welcome foster children into their home and have appeared on Headline News, 100 Huntley Street, Cornerstone Television Network, and multiple national radio programs. They have also been featured in interviews or articles on foster parenting in publications such as the Washington Post and The Gospel Coalition.