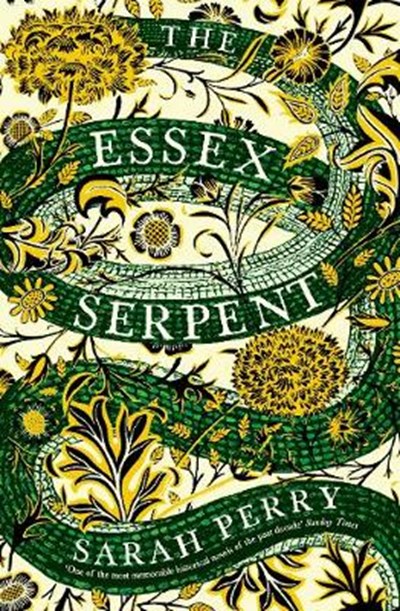 QTY
Add to Basket
Publisher: Profile Books Ltd
ISBN: 9781781255452
Number of Pages: 448
Published: 20/04/2017
Width: 12.8 cm
Height: 19.4 cm
Description Author Information Reviews
Now an Apple TV series starring Claire Danes and Tom Hiddleston THE SUNDAY TIMES NUMBER ONE BESTSELLER Overall Book of the Year and Fiction Book of the Year at the British Book Awards 2017 (Nibbies) Longlisted for the 2017 Baileys Women's Prize for Fiction The Waterstones Book of the Year 2016 Shortlisted for the 2016 Costa Novel Award London, 1893. When Cora Seaborne's controlling husband dies, she steps into her new life as a widow with as much relief as sadness. Along with her son Francis - a curious, obsessive boy - she leaves town for Essex, in the hope that fresh air and open space will provide refuge. On arrival, rumours reach them that the mythical Essex Serpent, once said to roam the marshes claiming lives, has returned to the coastal parish of Aldwinter. Cora, a keen amateur naturalist with no patience for superstition, is enthralled, convinced that what the local people think is a magical beast may be a yet-undiscovered species. As she sets out on its trail, she is introduced to William Ransome, Aldwinter's vicar, who is also deeply suspicious of the rumours, but thinks they are a distraction from true faith. As he tries to calm his parishioners, Will and Cora strike up an intense relationship, and although they agree on absolutely nothing, they find themselves at once drawn together and torn apart, affecting each other in ways that surprise them both. The Essex Serpent is a celebration of love, and the many different shapes it can take.

Sarah Perry was born in Essex in 1979. She has been the writer in residence at Gladstone's Library and the UNESCO World City of Literature Writer in Residence in Prague. After Me Comes the Flood, her first novel, was longlisted for the Guardian First Book Award and the Folio Prize, and won the East Anglian Book of the Year Award in 2014. Her latest novel, The Essex Serpent, was a number one bestseller, Waterstones Book of the Year 2016 and both Fiction book of the Year and Overall Book of the Year 2017 at the British Book Awards. It was then nominated for a further eight literary prizes, including the Costa Novel Award 2017, and the Bailey's Women's Prize for Fiction 2017. Her work is being translated into fifteen languages, and her essays and fiction have been broadcast on BBC Radio 4 and RTE 1. She reviews fiction for the Guardian and the Financial Times. She lives in Norwich.