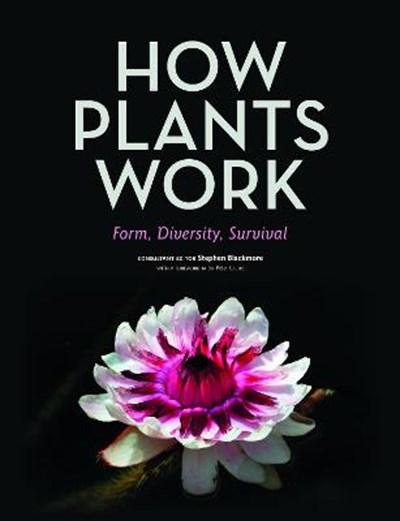 QTY
Add to Basket
Publisher: The Ivy Press
ISBN: 9781782406976
Published: 01/11/2018
Description Author Information Reviews
Today's plants are descended from simple algaes that first emerged more than 500 million years ago, and now there are around 400,000 species. The huge diversity of forms that that these plants take is staggering. From towering redwoods, to diminutive mosses; from plants that developed stinging hairs and poisons, to those that require fire to germinate tor ocean currents to dsitribute their seeds. But how have we arrived at this mind-blowing variety in the plant kingdom? How Plants Work seeks to answer this intriguing question, drawing from a wide range of examples-from the everyday leaf to the most bizarre flowers.

Stephen Blackmore CBE FRSE FRSB FLS is a British botanist, who was educated at St. George's School, Hong Kong and the University of Reading where he completed his PhD. He then worked at the Royal Society of London's Research Station on Aldabra Atoll in the Indian Ocean before being appointed Lecturer in Biology and Head of the National Herbarium and Botanic Garden at the University of Malawi. In 1980, he was appointed Head of Palynology at Natural History Museum in London and from 1990 to 1999 served there as Keeper of Botany. He was the 15th Regius Keeper of the Royal Botanic Garden Edinburgh from 1999 until 20 December 2013, and was appointed Her Majesty's Botanist in Scotland in 2010. Stephen has contributed to a number of successful books including the Pengion Dictionary of Botany, A Natural History of Belize, and Plants of China.