National Thanksgivings and Ideas of Britain, 1689-1816 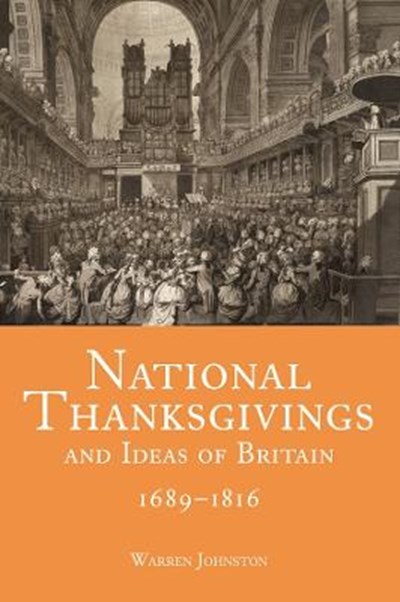 National Thanksgivings and Ideas of Britain, 1689-1816

QTY
Add to Basket
Publisher: Boydell & Brewer Ltd
ISBN: 9781783273584
Number of Pages: 413
Published: 20/03/2020
Width: 15.6 cm
Height: 23.4 cm
Description Author Information Reviews
This book is the first concentrated study of almost 600 sermons from over forty national thanksgivings in Britain during the long eighteenth century. These included celebrations of the 'Glorious' Revolution, the Union of Englandand Scotland, the Hanoverian succession, and the numerous military successes stretching from the reigns of William and Mary and Queen Anne to the Battle of Waterloo. Preachers used such occasions to reinforce ideas associated with Britain and being British during a significant period of national growth. Although the thanksgiving ceremonies were instigated through royal order, and accompanied by prescribed liturgies, the composition and delivery of sermons by clergymen in thousands of churches resulted in numerous and diverse expressions on developments within British society across a period of over 125 years. Topics included assertions about Britain's favoured position in the world, perceptions of the growth of empire, ideas on the impact of war and of peace, views on the effects of commerce and trade, opinions on politics, responses to religious and cultural diversity, and reactions to the French Revolution. The sermons were written by ministers from across England, as well as some from Scotland, Ireland, Wales, and colonial North America. In addition to those from Anglican pulpits, many of the sermons were by dissenting ministers.Overall, the book presents a vast array of information from a wide range of viewpoints, demonstrating how prominent national commemorations were used by preachers to convey compelling ideas about Britain and Britons from 1689 to1816.

WARREN JOHNSTON is Associate Professor in the Department of English and History at Algoma University, Sault Ste Marie, Ontario, Canada. He is the author of Revelation Restored: The Apocalypse in Later Seventeenth Century England (Boydell Press, 2011).