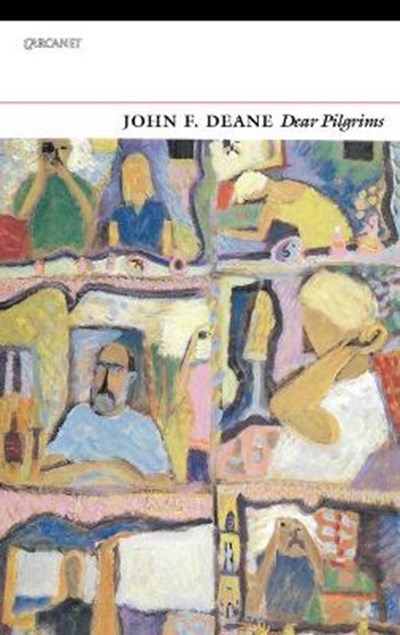 QTY
Add to Basket
Publisher: Carcanet Press Ltd
ISBN: 9781784105860
Number of Pages: 112
Published: 28/06/2018
Width: 13.5 cm
Height: 21.6 cm
Description Author Information Reviews
With `Crocus: a brief history', John F. Deane sets his Dear Pilgrims in motion, a series of brief histories of time, a time that is rich in incident and in redemption. In a decisively secular age, Deane's is a poetry of Christian belief. It explores renewal, alive with and to the kinds of witness he has learned from George Herbert, Gerard Manley Hopkins and R.S. Thomas. His `I', like theirs, makes space for a reluctant `us'. Dear Pilgrims includes actual pilgrimages. The poet moves through England (East Anglia in particular), Israel and Palestine, disclosing a `new testament' that revisions the Christian faith through the eyes of an unknown female disciple of Christ. He vividly adapts the Middle English poem Pearl and realises it for our time. He is also a master of the sonnet as an instrument of love, doubt and faith. The poet's voice, perhaps because of the timeless wisdom it carries, is vital and contemporary. It is no surprise that the founder of Poetry Ireland and Dedalus Press is a poet of wide reading and vision. The clarity of his verse and purpose makes his voice unique. Rowan Williams celebrates his `Music, a stony, damp and deeply alive landscape (both Ireland and the Holy Land), a passionate and searching engagement with God'.

John F. Deane was born on Achill Island in 1943. He founded Poetry Ireland - the National Poetry Society - and The Poetry Ireland Review in 1978, and is the founder of The Dedalus Press, of which he was editor from 1985 until 2006. In 2008 he was visiting scholar in the Burns Library of Boston College. He was Teilhard de Chardin Fellow in Christian Studies at Loyola University, Chicago, in 2016 and taught a course in poetry. John F. Deane's poetry has been translated and published in France, Bulgaria, Macedonia, Romania, Italy, Slovakia, Sweden and other countries. His poems in Italian won the 2002 Premio Internazionale di Poesia Citta di Marineo. His fiction has been published by Blackstaff Press in Belfast; his most recent novel Where No Storms Come was published by Blackstaff in 2011. He is the recipient of the O'Shaughnessy Award for Irish Poetry and the Marten Toonder Award for Literature. John F. Deane is a member of Aosdana, the body established by the Arts Council to honour artists `whose work had made an outstanding contribution to the arts in Ireland.' His poetry has been shortlisted for the Irish Times Poetry Now Award and the T.S. Eliot Prize. In 1996 Deane was elected Secretary-General of the European Academy of Poetry. In 2007 he was made Chevalier en l'ordre des arts et des lettres by the French government.