From the Oven to the Table

Simple dishes that look after themselves: THE SUNDAY TIMES BESTSELLER 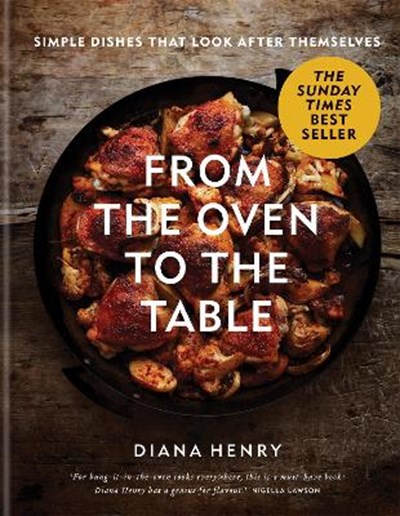 From the Oven to the Table

Simple dishes that look after themselves: THE SUNDAY TIMES BESTSELLER

QTY
Add to Basket
Publisher: Octopus Publishing Group
ISBN: 9781784725846
Number of Pages: 240
Published: 19/09/2019
Width: 19.4 cm
Height: 25 cm
Description Author Information Reviews
THE SUNDAY TIMES BESTSELLER 'For bung-it-in-the-oven cooks everywhere, this is a must-have book: Diana Henry has a genius for flavour.' - Nigella Lawson - The Sunday Times Best Cookbooks of the Year 'This might be Henry's most useful book yet, which is saying something.' - The Sunday Times - Guardian's Best Cookbooks and Food Writing of the Year 'The shining star is Diana Henry's From the Oven to the Table, in which she faultlessly delivers highly achievable, boldly flavoured dishes.' - Meera Sodha, the Guardian - Independent's Best Cookbooks of the Year 'A new cookbook from Diana Henry is always a reason to celebrate and From the Oven to the Table is no exception.' - Independent - Observer Food Monthly 20 Best Food Books of the Year 'There's so much to love about the latest from the Sunday Telegraph writer. Its great strength lies in updating and upgrading food you'll want to produce with a flourish. Deliciously photographed, too.' - Allan Jenkins, Observer Food Monthly - Daily Mail's Cookery Books of the Year 'Diana Henry is one of Britain's best cookery writers: her recipes are instantly appealing and she's the most elegant of writers. (...) Packed with hearty, highly flavoured dishes, it's the perfect winter cookbook for those days when you need sustenance without putting in too much effort.' - Daily Mail - Sunday Times Ireland Cookbook of the Year 'Of all the new cookbooks that came into my house this year, this is the one that has been used most often.' - Sunday Times Ireland - Delicious.magazine's Best Cookbooks of the Year 'Her most simply satisfying book yet? A must-own.' - Delicious.magazine - 'I'm not quite sure how Diana Henry does it but every book she writes is a winner; practical, enticing and evocative. And the recipes always work. This one may seem as simple as it gets (one-pot or tray cooking) but it never ceases to delight.' - Tom Parker Bowles, the Mail on Sunday - Diana Henry's favourite way to cook is to throw ingredients into a dish or roasting tin, slide them in the oven and let the heat behind that closed door transform them into golden, burnished meals. Most of the easy-going recipes in this wonderfully varied collection are cooked in one dish; some are ideas for simple accompaniments that can be cooked on another shelf at the same time. From quick after-work suppers to feasts for friends, the dishes are vibrant and modern and focus on grains, pulses and vegetables as much as meat and fish. With recipes such as Chicken Thighs with Miso, Sweet Potatoes & Spring Onions, Roast Indian-spiced Vegetables with Lime-Coriander Butter, and Roast Stone Fruit with Almond and Orange Flower Crumbs, Diana shows how the oven is the most useful bit of kit you have in your kitchen. Praise for How to Eat a Peach: 'This is an extraordinary piece of food writing, pitch perfect in every way. I couldn't love anyone who didn't love this book.' - Nigella Lawson '...her best yet...superb menus evoking place and occasion with consummate elegance' - Financial Times Food Book of the Year at the Andre Simon Food & Drink Book Awards 2019

Diana Henry is one of the UK's best-loved food writers. She has a weekly column in the Sunday Telegraph and also writes for BBC Good Food, House & Garden and Waitrose Weekend, as well as being a regular broadcaster on BBC Radio 4. Diana has won numerous awards for her journalism and books, including Cookery Journalist of the Year from the Guild of Food Writers (three times, most recently in 2015), Cookery Writer of the Year at the Fortnum & Mason Food and Drink Awards in 2013 and 2015 and Cookery Book of the Year for Simple at Fortnum & Mason Food and Drink Awards 2017. A Change of Appetite was voted Cookbook of the Year by the Guild of Food Writers in 2015 and A Bird in the Hand won a James Beard award in 2016. Diana has written ten other books including Crazy Water Pickled Lemons, A Bird in the Hand, Cook Simple, Salt Sugar Smoke, Roast Figs Sugar Snow, A Change of Appetite, Simple and How to Eat a Peach. A Bird in the Hand, Simple and How to Eat a Peach were Top 10 Bestsellers and Diana's books have sold over 700,000 copies worldwide. Diana studied English Literature at the University of Oxford and journalism at City, University of London. She was a TV producer for the BBC for over ten years before starting to write. She lives in London with her children. www.dianahenry.co.uk Instagram: @dianahenryfood Twitter: @dianahenryfood