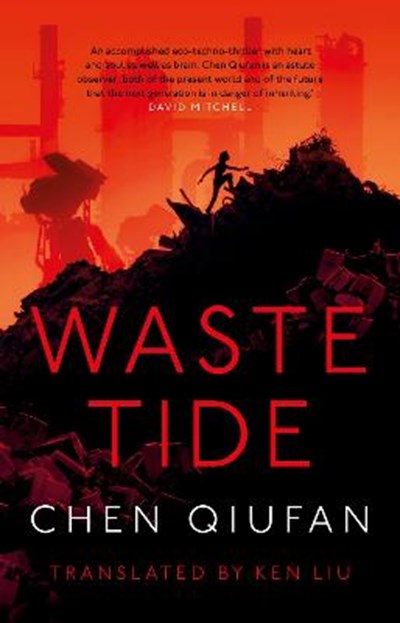 QTY
Add to Basket
Publisher: Head of Zeus
ISBN: 9781784977931
Number of Pages: 352
Published: 30/04/2019
Width: 14.5 cm
Height: 22.8 cm
Description Author Information Reviews
A Guardian Science Fiction Book of the Year. Mimi is drowning in the world's trash. She's a 'waste girl', a scavenger picking through towering heaps of hazardous electronic detritus. Along with thousands of other migrant workers, she was lured to Silicon Isle, off the southern coast of China, by the promise of steady work and a better life. But Silicon Isle is where the rotten fruits of capitalism and consumer culture come to their toxic end. The land is hopelessly polluted, the workers utterly at the mercy of those in power. And now a storm is gathering, as ruthless local gangs skirmish for control, eco-terrorists conspire, investors hunger for profit, and a Chinese-American interpreter searches for his roots. As these forces collide, conflict erupts - a war between rich and poor, a battle between past and future. Mimi must decide if she will remain a pawn... or change the rules of the game altogether. 'An accomplished eco-techno-thriller with heart and soul' DAVID MITCHELL. 'Waste Tide is a work of spoiled and toxic beauty... It's more than a timely eco-thriller; it's a dark mirror held up to our selves' SIMON INGS.

Chen Qiufan is an award-winning science fiction writer. He grew up near Guiyu, China, home to the world's largest e-waste recycling centre, an area the UN called an 'environmental calamity' and his experiences there inspired The Waste Tide. He currently lives in Shanghai and Beijing and works as the founder of Thema Mundi Studio. chenqiufan.cn @ChenQiufan Ken Liu is an award-winning American author of speculative fiction. His collection, The Paper Menagerie and Other Stories, has been published in more than a dozen languages. Liu's other works include The Grace of Kings, The Wall of Storms, and Star Wars tie-in The Legends of Luke Skywalker, and a second collection The Hidden Girl and Other Stories. He has been involved in multiple media adaptations of his work including the short story 'Good Hunting', adapted as an episode in Netflix's animated series Love, Death + Robots; and AMC's Pantheon, adapted from an interconnected series of short stories. 'The Hidden Girl', 'The Message', and The Grace of Kings have also been optioned for development. Liu previously worked as a software engineer, corporate lawyer, and litigation consultant. He frequently speaks at conferences and universities on topics including futurism, cryptocurrency, the mathematics of origami, and others. Liu lives with his family near Boston, Massachusetts.