You Can Change the World! 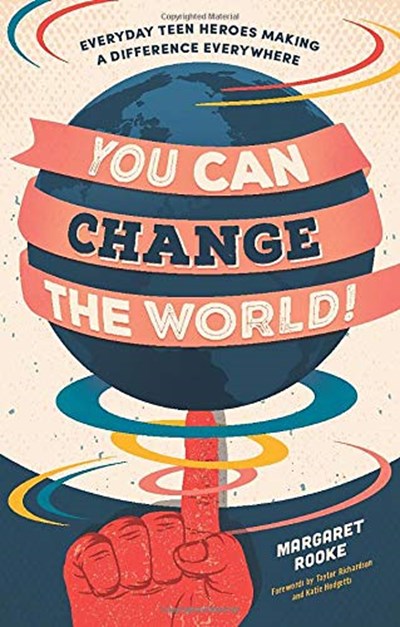 You Can Change the World!

" This inspirational book tells the stories of more than 50 of today's teenagers who've dared to change the world they live in. It's been written to show other teens they can do the same. Bestselling author Margaret Rooke asks teens about their experiences of being volunteers, social entrepreneurs and campaigners, online and beyond. They explain how they have survived in a world often obsessed by celebrity, social media and appearance, by refusing to conform to other's expectations. If you want to achieve against the odds and create genuine impact, this book may be the encouragement you need. The interviews cover race, sexuality, violence, grief, neurodiversity, bullying and other issues central to life today. Read about teens from around the world including: - Trisha, 18, who has invented a way of preventing bullying online - Dillon, 18, who takes damaged and donated clothing and upcycles it for the homeless - Guro, 13, who persuaded a pop band to portray women differently in its video - 'Happy D', 19, who learned to read at 14 and found ways to build his confidence - Heraa, 19, who fights Islamophobia online. - Ruben, 18, bullied because of Down's Syndrome, now a successful actor - Lucy who, at 14, walked into Tesco head office and persuaded them not to sell eggs from caged hens. - Cameron, 17, who has cerebral palsy and was side-lined by soccer teams who set up his own team 'Adversity United' - Alex, 18, who broke his back on his 15th birthday and says his injury has taught him to care for others - Amika, 18, who fights 'Period Poverty' - Jesse, 15, who's seven feet tall and embraces his stature - Billy, 18, who wore full make up every day at high school A fantastic book that captures the work of young changemakers. Powerful and inspiring, a catalogue of real role models. It will make you want to chase your passion. After all what better cause is there? Matteo Bergamini, CEO & Founder, Shout Out UK "

Margaret Rooke has more than 25 years' experience writing for national newspapers, magazines and books. She has two teenage children. She is the author of the bestselling Creative, Successful Dyslexic and Dyslexia is My Superpower.

As education editor of The Sunday Times I am fed up with hearing about Generation Snowflake. Here at last is a book that disproves that label. I loved reading these stories of 50 teenagers who have literally changed the world for the better through their efforts. Hurrah for the next generation - Generation Sunshine! - Sian Griffiths, Education and Families Editor, Sunday TimesThis book is positive, impactful and vital. By reading this, you really can change the world. - Eve Ainsworth, author of 7 DaysA beautiful tribute to the power of youth and their driving passion to see and make change in the world. What we gain from these active young voices is that hope, not despair is on the move, and one small change sparks another. - Amie Williams, Co-Founder and Executive Director, GlobalGirl MediaA step by step guide to changing the world, what's not to love? A great book for any teen wanting to turn passion into action. - Dr Pooky Knightsmith, Mental Health Advisor, Author Speaker & Educator, and Vice Chair of Children and Young People’s Mental Health Coalition'Inspirational' is an over-used word, but this really is an inspirational book! Modest, practical and passionate, these stories should be given to every young person who has a heart and is wondering how to use it. - Nick Luxmoore, school counsellor and authorThis book is truly an amazing read. It tells the beautiful stories of some absolutely astounding teenagers making the most of life. As a teenager myself these stories fill me with hope and show me that no matter how hard life can get as a teen, there's always a light at the end of the tunnel. And that even though sometimes you feel small and insignificant, You can make a difference. - Ben Roots, aged 17