Points of View from over a Decade 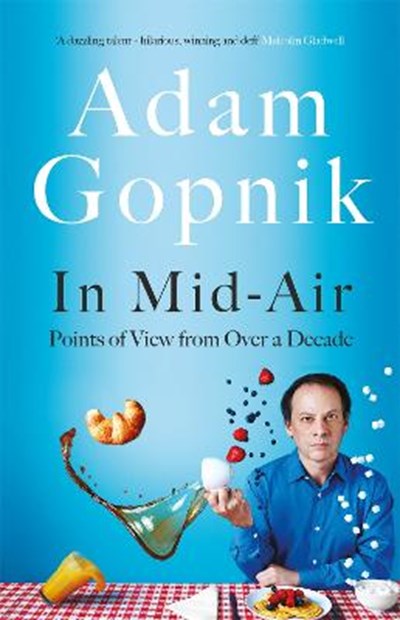 Points of View from over a Decade

QTY
Add to Basket
Publisher: Quercus Publishing
ISBN: 9781786489227
Number of Pages: 368
Published: 18/10/2018
Width: 16.7 cm
Height: 24.2 cm
Description Author Information Reviews
'Engaging, witty, thoughtful, clever, casual, ebullient, erudite and thoroughly modern' Spectator 'A dazzling talent - hilarious, winning and deft' Malcolm Gladwell In Mid-Air is a collection of short essays by the acclaimed writer and speaker, Adam Gopnik. Known for his ability to perceive 'the whole world in a grain of sand', he uses this format to take a dizzying range of subjects and intricately explore their meaning to our lives - as people, as citizens and as families. From how he works so that his daughter can have holes in her clothes, to why appropriation is more empowering than oppressing; from French sex to binge-watching TV, from the secret of a happy marriage to why we should mention the war - each topic is illuminated by his erudition and wit. As in their original form on the radio, Gopnik's essays - each one a pleasure garden of wry confessions, self-deprecating asides, wordplay and striking insights - feel like the most intimate of conversations between writer and reader; yet at the same time they capture a public forum of pithy debate and tender persuasion. Above all, In Mid-Air initiates a sense of wonder in the ordinary that yearns to be shared.

Adam Gopnik has been writing for the New Yorker since 1986. He is a three-time winner of the National Magazine Award for Essays and for Criticism, and the George Polk Award for magazine reporting. From 1995 to 2000 he lived in Paris; he now lives in New York City with his wife and their two children.