The Story of the Manchester Massacre 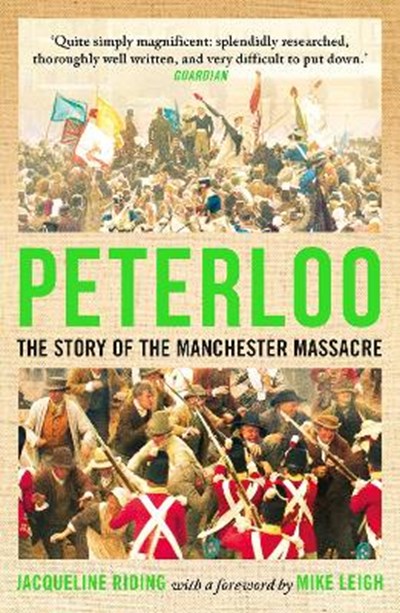 The Story of the Manchester Massacre

QTY
Add to Basket
Publisher: Head of Zeus
ISBN: 9781786695840
Number of Pages: 400
Published: 02/05/2019
Width: 12.9 cm
Height: 19.8 cm
Description Author Information Reviews
The story of the Peterloo massacre, a defining moment in the history of British democracy, told with passion and authority. 'A superb account of one of the defining moments in modern British history' Tristram Hunt. 'Peterloo is one of the greatest scandals of British political history ... Jacqueline Riding tells this tragic story with mesmerising skill' John Bew. 'Fast-paced and full of fascinating detail' Tim Clayton. On a hot late summer's day, a crowd of 60,000 gathered in St Peter's Field. They came from all over Lancashire - ordinary working-class men, women and children - walking to the sound of hymns and folk songs, wearing their best clothes and holding silk banners aloft. Their mood was happy, their purpose wholly serious: to demand fundamental reform of a corrupt electoral system. By the end of the day fifteen people, including two women and a child, were dead or dying and 650 injured, hacked down by drunken yeomanry after local magistrates panicked at the size of the crowd. Four years after defeating the 'tyrant' Bonaparte at Waterloo, the British state had turned its forces against its own people as they peaceably exercised their time-honoured liberties. As well as describing the events of 16 August in shattering detail, Jacqueline Riding evokes the febrile state of England in the late 1810s, paints a memorable portrait of the reform movement and its charismatic leaders, and assesses the political legacy of the massacre to the present day. As fast-paced and powerful as it is rigorously researched, Peterloo: The Story of the Manchester Massacre adds significantly to our understanding of a tragic staging-post on Britain's journey to full democracy.

Jacqueline Riding is the author of Jacobites: A New History of the '45 Rebellion. Former curator of the Palace of Westminster and Director of the Handel House Museum, she is a historical adviser on feature films, including Mike Leigh's Mr Turner and Peterloo.