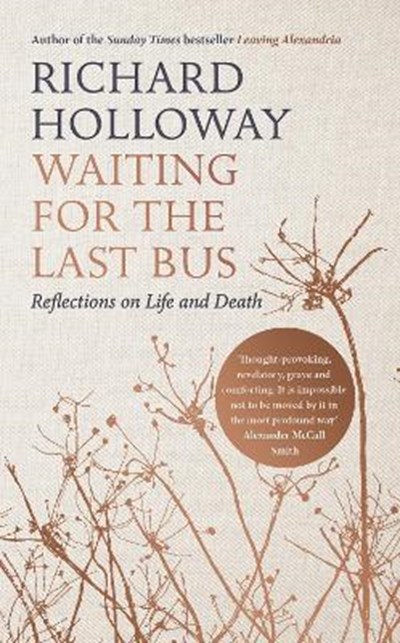 QTY
Add to Basket
Publisher: Canongate Books Ltd
ISBN: 9781786890214
Number of Pages: 176
Published: 01/03/2018
Width: 14.4 cm
Height: 22 cm
Description Author Information Reviews
Where do we go when we die? Or is there nowhere to go? Is death something we can do or is it just something that happens to us? Now in his ninth decade, former Bishop of Edinburgh Richard Holloway has spent a lifetime at the bedsides of the dying, guiding countless men and women towards peaceful deaths. In Waiting for the Last Bus, he presents a positive, meditative and profound exploration of the many important lessons we can learn from death: facing up to the limitations of our bodies as they falter, reflecting on our failings, and forgiving ourselves and others. But in a modern world increasingly wary of acknowledging mortality, this is also a stirring plea to reacquaint ourselves with death. Facing and welcoming death gives us the chance to think about not only the meaning of our own life, but of life itself; and can mean the difference between ordinary sorrow and unbearable regret at the end. Radical, joyful and moving, Waiting for the Last Bus is an invitation to reconsider life's greatest mystery by one of the most important and beloved religious leaders of our time.

Richard Holloway was Bishop of Edinburgh and Primus of the Scottish Episcopal Church. A former Gresham Professor of Divinity and Chairman of the Joint Board of the Scottish Arts Council and Scottish Screen, he is a fellow of the Royal Society of Edinburgh. Leaving Alexandria won the PEN/Ackerley Prize 2013 and was shortlisted for the Orwell Prize 2013. Holloway has written for many newspapers in Britain, including The Times, Guardian, Observer, Herald and Scotsman. He has also presented many series for BBC television and radio; Waiting for the Last Bus originated as a five-part series on Radio 4 in 2016.