The Remaking of Journalism and Why It Matters Now 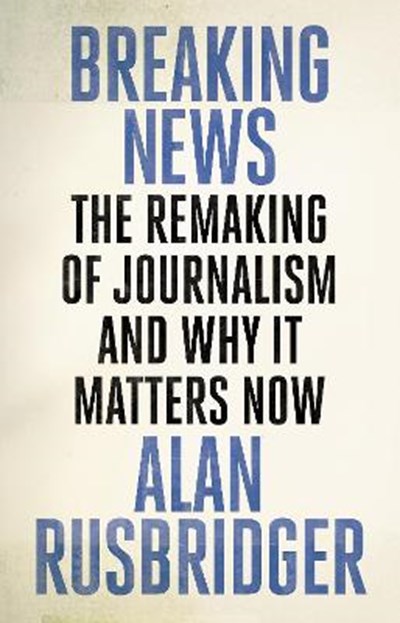 The Remaking of Journalism and Why It Matters Now

Publisher: Canongate Books Ltd
ISBN: 9781786890931
Number of Pages: 464
Published: 06/09/2018
Width: 16.2 cm
Height: 24 cm
Description Author Information Reviews
How do we know any more what is true and what isn't? We are living through the greatest communication revolution since Gutenberg in which falsehood regularly seems to overwhelm truth. In Breaking News Alan Rusbridger offers an urgent and agenda-setting examination of the past, present and future of the press, and the forces menacing its freedom. The news media have been disrupted by huge and fast-moving changes. The growth of social media and with it the ability of billions of people to publish has created a vast amount of unreliable and false news which now competes with, and sometimes drowns, more established forms of journalism. The President of the United States regularly lies to the public and brands his critics 'fake'. Politicians openly rubbish the views of 'so-called experts'. Where can we look for reliable, verifiable sources of news and information? What does all this mean for democracy? And what will the future hold? Reflecting on his twenty years as editor of the Guardian; and his experience of breaking some of the most significant news stories of our time, including the Edward Snowden revelations, phone-hacking, WikiLeaks and the Keep it in the Ground campaign, Rusbridger answers these questions and offers a stirring defence of why quality journalism matters now more than ever.

Alan Rusbridger was Editor-in-Chief of Guardian News & Media from 1995 to 2015. He launched the Guardian in the US and Australia as well as building a website which today attracts more than 100 million unique browsers a month. The paper's coverage of phone-hacking led to the Leveson Inquiry into press standards and ethics. Guardian US won the 2014 Pulitzer Prize for public service for its leading global coverage of the Snowden revelations. He is the author of Play It Again. arusbridger.com | @arusbridger