Essays in Biblical Criticism and Exegesis 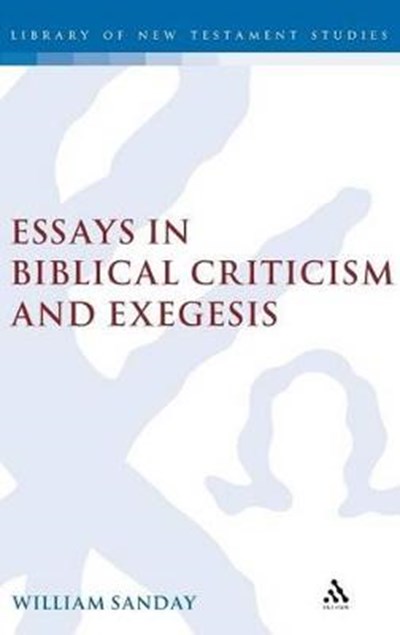 Essays in Biblical Criticism and Exegesis

QTY
Add to Basket
Publisher: Bloomsbury Publishing PLC
ISBN: 9781841272818
Number of Pages: 248
Published: 01/04/2001
Width: 15.6 cm
Height: 23.4 cm
Description Author Information Reviews
William Sanday (1843-1920) is best known today perhaps for his editing of a now classic work on the Synoptic Gospels and his co-authorship of a still-important commentary on the book of Romans (ICC). However, this great Oxford scholar also produced a large number of other important books and other writings. This volume, the first in the new Trinity Academic Press sub-series, Classics in Biblical and Theological Studies, gathers together in an accessible form a number of Sanday's important articles in the areas of method, language and exegesis. In the section on method, Sanday has articles on biblical criticism and interpretation. His writings on language include his responses in his dispute with A. Roberts. The section on exegesis touches on interpretation of the parables, understanding the son of man, issues in Acts 15, and, perhaps most importantly, his dispute with W. Ramsay. This is an important collection of essays by an important but now unfortunately often overlooked scholar of a previous generation.

William Sanday was a Fellow of Trinity College, Oxford 1866-69, Principal of Bishop Hatfield's Hall in Durham, 1876-83, Dean Ireland Professor of Exegesis of Holy Scripture, Durham 1883-95 and Lady Margaret Professor of Divinity and Canon of Christ Church at the University of Oxford, 1895 - 1919

"Clearly written, full of common sense, sound judgement and learned conservatism, they illustrate the century-old adage (once true) about theology being 'created in Germany, corrected in England'." Theological Book Review, Feed the Minds