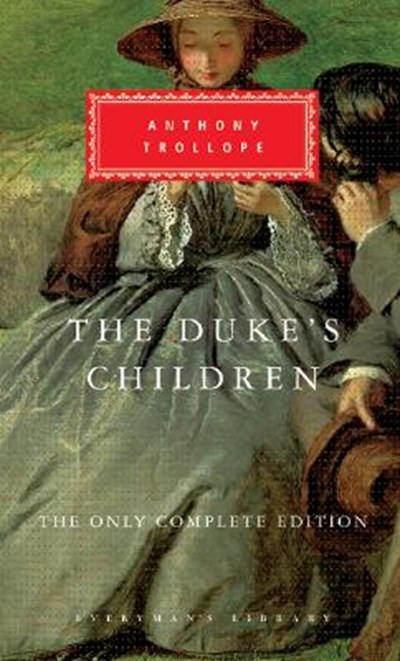 QTY
Add to Basket
Publisher: Everyman
ISBN: 9781841593784
Number of Pages: 760
Published: 06/04/2017
Width: 13.5 cm
Height: 21 cm
Description Author Information Reviews
Plantagenet Palliser, the Duke of Omnium and former Prime Minister of England, is widowed and wracked by grief. Struggling to adapt to life without his beloved Lady Glencora, he works hard to guide and support his three adult children. Palliser soon discovers, however, that his own plans for them are very different from their desires. Sent down from university in disgrace, his two sons quickly begin to run up gambling debts. His only daughter, meanwhile, longs passionately to marry the poor son of a county squire against her father's will. But while the Duke's dearest wishes for the three are thwarted one by one, he ultimately comes to understand that parents can learn from their own children.

Anthony Trollope was born on 24 April 1815 and attended both Harrow and Winchester schools. His family were poor and eventually were forced to move to Belgium, where his father died. His mother, Frances Trollope, supported the family through writing. Trollope began a life-long career in the civil service with a position as a clerk in the General Post Office in London - he is also credited with later introducing the pillar box. He published his first novel, The Macdermots of Ballycloran in 1847, but his fourth novel, The Warden (1855) began the series of 'Barsetshire' novels for which he was to become best known. This series of five novels featuring interconnecting characters spanned twenty years of Trollope's career as a novelist, as did the 'Palliser' series. He wrong over 47 novels in total, as well as short stories, biographies, travel books and his own autobiography, which was published posthumously in 1883. Trollope resigned from the Post Office in 1867 and stood for Parliament as a Liberal, though he was not elected. He died on 6 December 1882.