Yes To Life In Spite of Everything 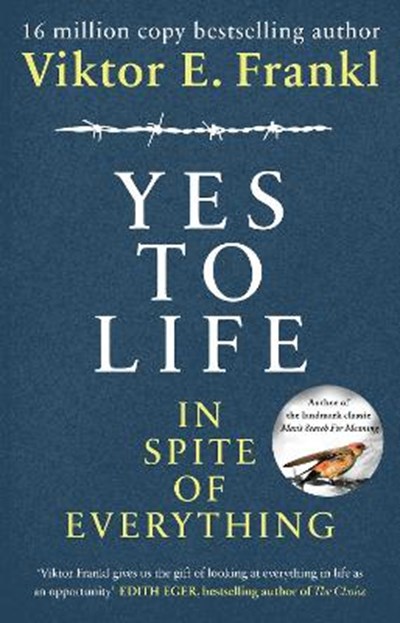 Yes To Life In Spite of Everything

QTY
Add to Basket
Publisher: Ebury Publishing
ISBN: 9781846046360
Number of Pages: 160
Published: 07/05/2020
Width: 14.4 cm
Height: 22.2 cm
Description Author Information Reviews
'Viktor Frankl gives us the gift of looking at everything in life as an opportunity' Edith Eger, bestselling author of The Choice 'Offers a path to finding hope even in these dark times' The New York Times A rediscovered masterpiece by the 16 million copy bestselling author of Man's Search For Meaning Just months after his liberation from Auschwitz renowned psychiatrist Viktor E. Frankl delivered a series of talks revealing the foundations of his life-affirming philosophy. The psychologist, who would soon become world famous, explained his central thoughts on meaning, resilience and his conviction that every crisis contains opportunity. Published here for the very first time in English, Frankl's words resonate as strongly today as they did in 1946. Despite the unspeakable horrors in the camp, Frankl learnt from his fellow inmates that it is always possible to say 'yes to life' - a profound and timeless lesson for us all. With an introduction by Daniel Goleman. 'Frankl's is a voice that seems as necessary now as it was in the shadow of the Holocaust' Guardian

Viktor Frankl was born in Vienna in 1905 and was Professor of Neurology and Psychiatry at the University of Vienna Medical School. His wife, father, mother and brother all died in Nazi concentration camps, only he and his sister survived, but he never lost the qualities of compassion, loyalty, undaunted spirit and thirst for life (earning his pilot's licence aged 67). He died in Vienna in 1997.