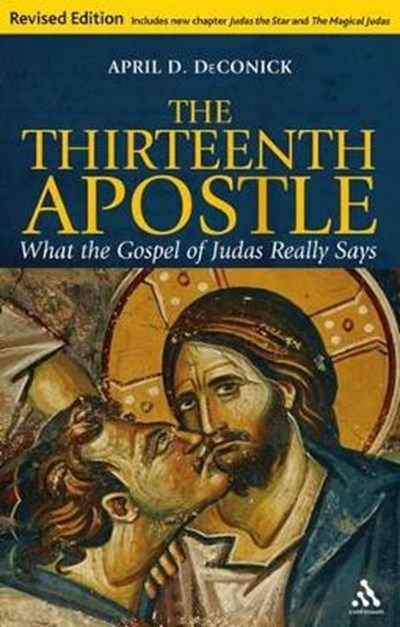 QTY
Add to Basket
Publisher: Bloomsbury Publishing PLC
ISBN: 9781847065681
Number of Pages: 296
Published: 23/04/2009
Width: 13.8 cm
Height: 21.6 cm
Description Author Information Reviews
In 2006 National Geographic released the first English translation of the Gospel of Judas, a second-century text discovered in Egypt in the 1970s. The translation caused a sensation because it seemed to overturn the popular image of Judas the betrayer and instead presented a benevolent Judas who was a friend of Jesus. In The Thirteenth Apostle April DeConick offers a new translation of the Gospel of Judas which seriously challenges the National Geographic interpretation of a good Judas. Inspired by the efforts of the National Geographic team to piece together this ancient manuscript, DeConick sought out the original Coptic text and began her own translation. "I didn't find the sublime Judas, at least not in Coptic. What I found were a series of English translation choices made by the National Geographic team, choices that permitted a different Judas to emerge in the English translation than in the Coptic original. Judas was not only not sublime, he was far more demonic than any Judas I know in any other piece of early Christian literature, Gnostic or otherwise." DeConick contends that the Gospel of Judas is not about a "good" Judas, or even a "poor old" Judas. It is a gospel parody about a "demon" Judas written by a particular group of Gnostic Christians known as the Sethians who lived in the second century CE. The purpose of the text was to criticize 'mainstream' or apostolic Christianity from the point of view of these Gnostic Christians, especially their doctrine of atonement, their Eucharistic practices, and their creedal faith which they claimed to have inherited from the twelve disciples. Professor DeConick provides her English translation and interpretation of this newly recovered gospel within the previously overlooked context of a Christianity in the second century that was sectarian and conflicted. The first book to challenge the National Geographic version of the Gospel of Judas, The Thirteenth Apostle is sure to inspire to fresh debate around this most infamous of biblical figures. This fully revised and updated edition includes a new chapter, 'Judas the Star', and a substantial new preface which reflects upon the controversial reception of The Thirteenth Apostle and the advances in scholarship that have been made since its publication.

April D. DeConick is the Isla Carroll and Percy E. Turner Professor of Biblical Studies in the Department of Religious Studies at Rice University (USA). Her books include: Recovering the Original Gospel of Thomas: A History of the Gospel and Its Growth (T. & T. Clark, 2005), The Original Gospel of Thomas in Translation, with Commentary and New English Translation of the Complete Gospel (T. & T. Clark, 2006) and The Thirteenth Apostle: what the Gospel of Judas really says (Continuum, 2007).

"Turning upside down the most accepted understanding of the Gospel of Judas (Codex Tchacos), April DeConick gives a radically new reading of this Coptic apocryphon, based on her fresh, personal translation... Those who are interested in the Gnostic adventure cannot miss The Thirteenth Apostle." Professor Madeleine Scopello, Director of Research at the National Centre of Scientific Research Sorbonne, Paris"