The UN, the Cold War and White Supremacy in Africa 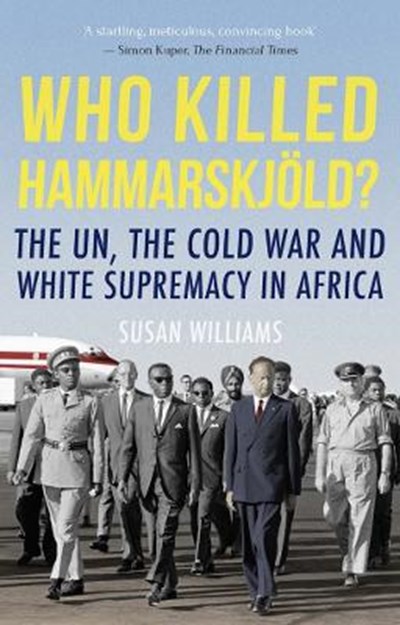 The UN, the Cold War and White Supremacy in Africa

QTY
Add to Basket
Publisher: C Hurst & Co Publishers Ltd
ISBN: 9781849048026
Number of Pages: 340
Published: 29/12/2016
Width: 13.6 cm
Height: 21.6 cm
Description Author Information Reviews
One of the outstanding mysteries of the twentieth century, and one with huge political resonance, is the death of Dag Hammarskjold and his UN team in a plane crash in central Africa in 1961. Just minutes after midnight, his aircraft plunged into thick forest in the British colony of Northern Rhodesia (Zambia), abruptly ending his mission to bring peace to the Congo. Across the world, many suspected sabotage, accusing the multi-nationals and the governments of Britain, Belgium, the USA and South Africa of involvement in the disaster. These suspicions have never gone away.British High Commissioner Lord Alport was waiting at the airport when the aircraft crashed nearby. He bizarrely insisted to the airport management that Hammarskjold had flown elsewhere - even though his aircraft was reported overhead. This postponed a search for so long that the wreckage of the plane was not found for fifteen hours. White mercenaries were at the airport that night too, including the South African pilot Jerry Puren, whose bombing of Congolese villages led, in his own words, to 'flaming huts ...destruction and death'. These soldiers of fortune were backed by Sir Roy Welensky, Prime Minister of the Rhodesian Federation, who was ready to stop at nothing to maintain white rule and thought the United Nations was synonymous with the Nazis. The Rhodesian government conducted an official inquiry, which blamed pilot error. But as this book will show, it was a massive cover-up that suppressed and dismissed a mass of crucial evidence, especially that of African eye-witnesses. A subsequent UN inquiry was unable to rule out foul play - but had no access to the evidence to show how and why. Now, for the first time, this story can be told. Who Killed Hammarskjold follows the author on her intriguing and often frightening journey of research to Zambia, South Africa, the USA, Sweden, Norway, Britain, France and Belgium, where she unearthed a mass of new and hitherto secret documentary and photographic evidence.

Susan Williams is Senior Fellow at the Institute of Commonwealth Studies, School of Advanced Study, University of London. Her books on Africa include Spies in the Congo: The Race for the Ore That Built the Atomic Bomb (2016) and Colour Bar: The Triumph of Seretse Khama and His Nation (2006). Pathe is releasing a film based on The Colour Bar under the title A United Kingdom in the autumn of 2016 starring David Oyelowo and Rosamund Pike.