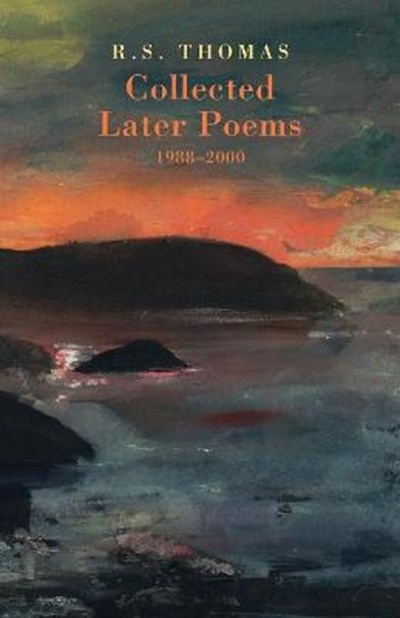 QTY
Add to Basket
Publisher: Bloodaxe Books Ltd
ISBN: 9781852246488
Number of Pages: 368
Published: 25/03/2004
Width: 13.8 cm
Height: 21.6 cm
Description Author Information Reviews
R.S. Thomas (1913-2000) is one of the major poets of our time, as well as one of the finest religious poets in the English language and Wales's greatest poet. This substantial gathering of his late poems shows us the final flowering of a truly great poet still writing at the height of his powers right through his 70s and 80s. It begins with his autobiographical sequence The Echoes Return Slow, which has been unavailable for many years, and goes up to Residues, written immediately before his death at the age of 87. These powerful poems - about time and history, the self, love, the machine, the Cross and prayer - cover all of his major areas of questioning. This is R.S. Thomas in a winter light, his fury concentrated on the inhumanity of man and modern technology, his gaze absorbed by the God he felt in Nature, but finding nourishment in 'waste places'. At the same time he writes with resigned feeling and immense insight, as well as grim humour and playful irony, of isolation, ageing, marriage and 'love's shining greenhouses'. For Thomas, 'Poetry is that / which arrives at the intellect / by way of the heart.' Collected Later Poems 1988-2000 is the sequel to R.S. Thomas's Collected Poems 1945-1990 (Dent, 1993; Phoenix Press, 1995), which only covers his collections up to Experimenting with an Amen (1986). It reprints in full the contents of R.S. Thomas's last five collections, The Echoes Return Slow (Macmillan, 1988: unavailable for many years), and Bloodaxe's Counterpoint (1990), Mass for Hard Times (1992), No Truce with the Furies (1995) and the posthumously published Residues (2002). It was a Poetry Book Society Recommendation. It was followed in 2013 by Uncollected Poems and in 2016 by Too Brave to Dream.

R.S. Thomas (1913-2000) is a major writer of our time, one of the finest religious poets in the English language and one of Wales's greatest poets. He published over 50 books of poetry and prose. Most of his poems from his first 50 years of writing are in Collected Poems 1945-1990 (Phoenix Press), while the poems from his last five collections are included in Collected Later Poems (2004) from Bloodaxe. His Penguin Selected Poems is a curious selection drawing on both his Collecteds. His Uncollected Poems, edited by Tony Brown and Jason Walford Davies (Bloodaxe Books, 2013), selects previously published but uncollected poems included in none of his other published books. This was followed by Too Brave to Dream: encounters with modern art (Bloodaxe Books, 2016), also edited by Tony Brown and Jason Walford Davies, a collection of his recently discovered poems on modernist art published with reproductions of the work which inspired them. Born in Cardiff, the son of a sea captain, he moved with his family in 1918 to Holyhead on Anglesey. He was awarded a bursary in 1932 to study at the University College of North Wales, Bangor, where he read Classics. In 1936, having completed his theological training at St. Michael's College, Llandaff, he was ordained as a priest in the Church in Wales. From 1936 to 1940 he was the curate of Chirk, Denbighshire, where he met his future wife, Mildred (Elsi) Eldridge, an English artist. He subsequently became curate at Tallarn Green, Flintshire. They married in 1940 and remained together until her death in 1991. He married his second wife Betty in 1996. From 1942 to 1954 Thomas was rector at Manafon, in rural Montgomeryshire. It was during his time at Manafon that he first began to study Welsh and that he published his first three volumes of poetry. He learnt the Welsh language at the age of 30, too late in life, he said, to be able to write poetry in it, although he did write and publish memoirs in Welsh. In his later years he worked in predominantly Welsh-speaking communities at Eglwys-fach and Aberdaron. He retired from the Church in 1978, and afterwards lived on Anglesey and on Llyn. He won several awards, including the Queen's Gold Medal for Poetry in 1964. In 1996 he won the Lannan Lifetime Achievement Award for Poetry and the Horst Bienek Prize for Poetry. He was also nominated for the Nobel Prize in Literature in the same year.