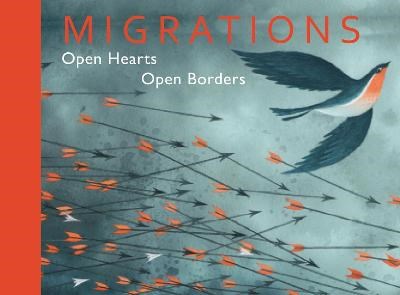 QTY
Add to Basket
Free UK P&P
Publisher: Otter-Barry Books Ltd
ISBN: 9781910959800
Published: 09/05/2019
Description Author Information Reviews
As the world refugee crisis intensified, back in 2017 two teachers of Illustration at Worcester University had the idea of contacting illustrator friends around the world, asking them to draw and send an original postcard on the theme of Migration, to form an installation at the Biennale of Illustration at Bratislava, Slovakia. The response astonished them, with hundreds of cards and personal messages, forming a visually stunning show. The installation has since been mounted in South Korea and will be displayed at further places around the world, including Amnesty International's London offices in the summer of 2019. Over fifty of the postcards, mailed from 32 countries, are reproduced in actual size in this very special book, to be published on 9 May 2019. All the works have been donated and the book's royalties will be shared between Amnesty International and IBBY (International Board on Books for Youth). Leading children's book illustrators from the UK, including Christopher Corr, Neal Layton, Jackie Morris, Jane Ray and Chris Riddell, have contributed cards, along with illustrators from Argentina to Russia, South Africa to Iran. Australian illustrator Shaun Tan has written the Introduction. Janetta Otter-Barry, publisher of Otter-Barry Books, says: "It's an honour to be chosen as publishers of this book. The fragility of a mailed postcard and of a migrating bird come together so aptly to capture the theme of human migration. It is quite literally formed of images and messages of hope, and I think that people will cherish it for that reason as well as for its brilliant variety and heartfelt approach." Migrations: Open Hearts, Open Borders is edited by the International Centre for the Picture Book in Society at the University of Worcester, and will be published on 9 May 2019 by Otter-Barry Books. Hardback GBP9.99

Migrations, an exhibition of the International Centre for the Picture Book in Society, was first shown at BIBIANA, Bratislava, in September 2017. The ICPBS, founded at the University of Worcester, England, by Piet Grobler and Tobias Hickey, emphasises and celebrates the power of illustration to engage with society, particularly by focusing on issues of cultural diversity and the inclusivity of minorities and socially disenfranchised people.